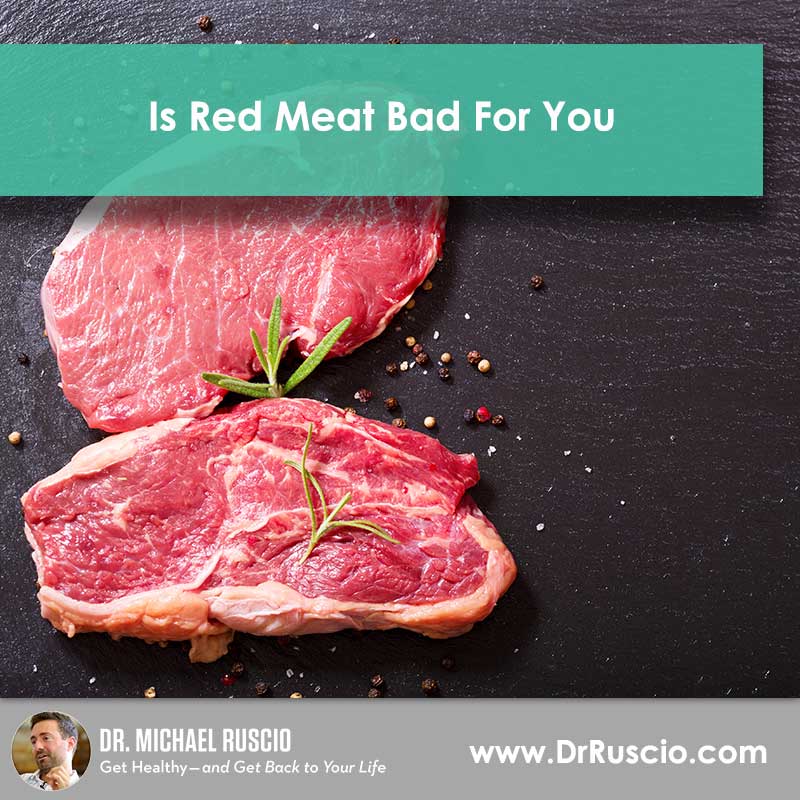 Red meat is often vilified as being unhealthy, artery clogging, cancer promoting, etc.… However, a recent meta-analysis has found that it might be unhealthy behaviors that accompany red meat consumption that are responsible and not the red meat itself. Let’s discuss.

Is Red Meat Bad For You?

Dr. Michael Ruscio: Hi, this is Dr. Ruscio. And let’s discuss if red meat is bad for you.

Certainly, if you’re someone who’s trying to be healthy, there’s a few pieces of dietary advice you’ve likely heard, whether they’re true or not true: avoid fats, or eat lots of healthy fat, avoid red meat, or eat red meat, eat lots of vegetables, eat lots of fiber, the common things that we throw around.

One of them is red meat. And there’s definitely two maybe polarizing opposite opinions on red meat. Some people, most namely in the Paleo or ancestral community, believe that our hunter-gatherer ancestors routinely ate red meat, and it’s an important part of a healthy diet. And on the other end, there are people of maybe a more vegetarian-type of persuasion that argue that red meat consumption is associated with obesity, heart disease, cancer.

And so it’s hard to get a good read on this, which is understandable. And, as someone who sees the merit in both of these dietary camps, admittedly, I’d lean a little bit more in the Paleo direction. But clearly, there’s evidence showing that all of these different dietary types, from vegetarian all the way through Paleo diet, have merit and can help. So it’s hard though to try to parse through and find where the truth is.

Now, a recent study was published that I found to be very interesting. And I thought you might find it interesting, also. I’ll put the abstract of the study up here on the screen. The study’s entitled, “Health risk factors associated with meat, fruit and vegetable consumption in cohort studies: A comprehensive meta-analysis.” Okay.

So the comprehensive meta-analysis part of the title of this, obviously, is very important, because a comprehensive meta-analysis means that essentially a group of researchers went out and they reviewed all the literature they could find on the association of red meat, fruit, and vegetable consumption to other healthy lifestyle factors and how it pertains to one’s health.

So, oftentimes, and this is something that I really think needs to stop, someone thinks something, and they find a study that supports something, and they shout from the rooftops, “This is the way it is. And here’s the support.” And all the while, they don’t tell you about these studies that contradict what they are espousing.

And you get this very isolated or biased and cherry-picked opinion. And it doesn’t help anybody, because the way that we can all learn and become healthier is by looking at all of the evidence, having a discussion about that evidence, and then coming to a reasonable conclusion. So a meta-analysis will give you a summary of all that data so that you can make an informed decision on a given issue.

So let’s pick in to a few of the points of the study. And again, I’ll put some of these up here on the screen and read a few of the notes from the study. So, “Intake of red meat was positively associated with BMI or weight, percentage of overweight and obese.” So all of these go together. Usually, if your BMI is heavier, you’re more prone to be overweight, you’re more prone to be obese.

Okay, so the researchers then conclude, “In conclusion, the distribution of health risk factors associated with high meat, and fruit and vegetable consumption may differ from those of low consumers. Some of the differences may mediate, confound, or modify the relationship between diet and non-communicable disease risk.”

Hey, guys. Just a quick reminder that my new book is finally available: Healthy Gut, Healthy You. And for our audience only, we are opening up a presale campaign so you can get the book before anyone else. And the presale campaign is open now up through until Friday, February 2nd.

So if you’re looking to learn more about your gut health and have a no-nonsense education on your gut and what to do to improve your gut, then this book Healthy Gut, Healthy You is going to hopefully be a huge milestone in that direction.

If you go to DrRuscio.com/GetGutBook, you can learn more and/or pick up a copy. I’m very excited about this book. What I think I’m most excited about is the self-help plan at the end. So if you’re looking for a protocol—“What diet should I use? For how long should I use it? Should I also use probiotics? Should I maybe do an antimicrobial herbal protocol? Maybe I should consider an elemental diet. Should I be using motility agents, yes or no? How do I wean off of these things?”—the self-help plan at the end of the book walks you through, step by step, with an assessment at the end of each step, exactly what the best plan for you will be.

It’s a 100% adaptable, personalized plan, and I think it’s going to really fill in the gaps for being able to take all the stuff that you learn about the gut and apply it to yourself in an efficient and effective plan. So, again, until February 2nd, the book is on presale for our audience only. Go over to DrRuscio.com/GetGutBook, and pick up your copy today. Thanks!

Right, so why this is important is because, essentially, people who eat red meat may be more prone to other unhealthy lifestyle factors. But it doesn’t mean that if you’re someone, for example, who is going on a Paleo-type diet, who is not smoking, who is exercising, and is eating red meat, amongst other things like fruits and vegetables, that the red meat is going to be a problem.

Oftentimes, red meat is vilified. And that really may be a mistake. Again, this meta-analysis is showing that the data is pretty incontrovertible that unfortunately, those who have unhealthy lifestyle practices are more prone to eat red meat. Therefore, if you show an increase in cardiovascular disease, cardiovascular episodes, overweight, cancer, what have you, that may be associated or be caused, not by the red meat, but be caused from the smoking, the low physical activity, what have you. Very important to keep that in mind. Okay.

And a few other thoughts for you. And I guess maybe the one most salient would be to avoid dietary dogma. Anytime someone comes at you with an approach that seems to be hard driving, “You’ve got to be a vegetarian. You’ve got to be Paleo. You’ve got to be Mediterranean.” I would take a moment to pause for that.

Of course, for vegetarians, if you have an ethical reason that you don’t want to eat meat, that’s fine. And that’s its own issue. But from a healthcare perspective, for a vegetarian to argue that you should never eat meat because it’s cancer-causing or heart disease-causing, or what have you, there’s not really great evidence to support that.

Also, there’s been two studies showing that a Paleo diet or a Mediterranean diet can reduce risk of colorectal cancer. It’s another commonly used argument in the vegetarian camp. But on the other end of things, there have also been studies done, one most notably in Asian women, that show that they actually lost more weight on a higher-carb, lower-fat diet. And all these diets tend to improve health from baseline, meaning from no diet at all.

So all these diets can work. It’s, I think, important to try to find the diet that works best for you and not get thrown off of working through some of these dietary experiments because a friend of yours watched a documentary that vilified meat and now you’re unwilling to try that, because if you’re someone, for example, who has a gut or a metabolism that does better on a lower-carb approach, and you’re pushed off of that approach because of dogma, then all that does is really make it harder for you to get the dietary recommendations that you need.

In any case, hopefully, this information helps you get healthy, and get back to your life. Thanks.

4 thoughts on “Is Red Meat Bad For You?”