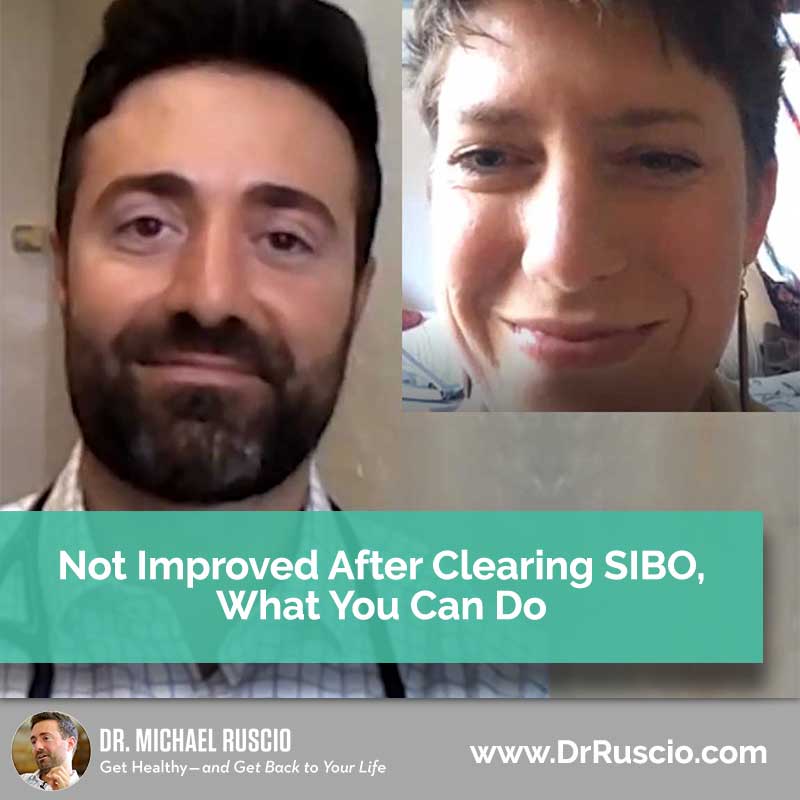 What do you do if you have cleared SIBO but still have symptoms? Sometimes, all that is needed is a subtle push to help your gut fully heal. Today we will speak with Catherine, who, after clearing symptoms with another doctor,  was still suffering from the following symptoms:

A few strategic dietary modifications were able to resolve all these symptoms. Let’s elaborate.

This is not uncommon.

It is not uncommon to struggle with a few foods even after a therapeutic period of 2-6 months.

Dr. Michael Ruscio: Hi, everyone. This is Dr. Ruscio. I’m here with Catherine who has had some nice results in improving her gut health but is also, I guess, grappling with some common questions that people have as they go through the process. So I thought we could briefly talk about her experience and some of the things that she’s been grappling with.

So Catherine, thank you for taking a moment to speak with us.

DrMR: Can you tell people a little bit about the symptoms that you were experiencing and, in short, the road that you had traversed up until you got to our office? 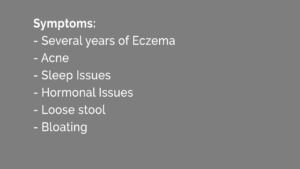 Catherine: Sure. So,  I had a lot of eczema that I was dealing with for several years before I started working with you, as well as I’ve always dealt with really bad acne and issues sleeping. I noticed I was having hormonal issues as well around the time of my period.

And biggest symptom was my digestive tract. It just wasn’t right, and it hadn’t been right for years and years. Having really loose stools all the time, undigested food, and lots of bloating. No constipation for me. So the opposite of some people.

DrMR: And had you performed any therapies before? I believe you had done some treatment in your gut health previously and seen some results. Am I encapsulating that?

Catherine: Yeah. I worked with a naturopathic doctor for a while, and we had tried using probiotics as well as some antimicrobials which seemed to really help with my eczema but didn’t do much for my digestion. And my eczema continued to kind of come back after a while. So it didn’t fully heal.

DrMR: Yeah. So I think you’re in a somewhat normal boat for people who have done some research, maybe seen another doctor, seen some improvements, but still had some of these things that didn’t feel like they were quite lining up. And that’s why I thought this would be a nice conversation to have. 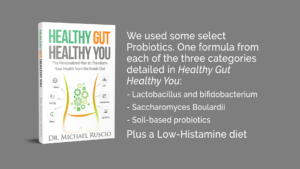 But we didn’t really have to directly go after those. We did use some select probiotics, one formula from each of the three categories that I talk about in Healthy Gut, Healthy You. Plus, a low histamine diet. And those two things together seemed to really help you turn the corner into being able to eat more foods.

Now, all of your symptoms have responded: your bowel consistency, your eczema, your insomnia, your itchy skin, your brain fog. Even your female hormone-related symptoms have all improved. And there’s a couple of things there that I think are important to mention. One is that dysbiosis, imbalances in fungus and bacteria and other organisms in the gut, can be remedied with probiotics. And it’s important to keep that in mind.

And I think you just need a broader probiotic presentation to your gut to achieve the full response that you’re achieving now. Plus, you exhibited signs of being histamine-sensitive, which is so paradoxical because we’re so inundated with messaging that histamine foods, all the fermented foods, are healthy for you.

DrMR: It’s not to say that they’re unhealthy, but if you’re consuming more than your body can metabolize, it can become problematic. And when people have impaired digestive health, they actually have impaired metabolism of histamine. And this is where a lower histamine diet can be very helpful. Did you want to comment at all regarding your experience with that?

Catherine: Yeah. Originally, we just tried the low FODMAP diet which is already lower in histamine, and I noticed drastic improvement with my eczema and my acne as well and my hormones and my sleep. But it wasn’t until recently when we added in the low histamine where finally I had relief from itching. I spent years just having non-stop itching all over my body. And for the first time in years, I have relief from that because of the low histamine. Also, my food is better digested with lower histamine. So that’s been nice to see every morning.

DrMR: And you make a great point. I’m glad you mentioned that the initial diet that we went through, which was the low FODMAP diet, and you did derive noteworthy benefit from that, but there were a few things that were not fully responding. And the addition to low histamine finally got us there.

And the way I look at this histamine issue is on a continuum where one of the first things we can do is use probiotics which, in many cases, can have an anti-histamine effect. From a dietary perspective, we can go low FODMAP first because that will reduce histamine. It has been shown in one published study.

And then we can even go further though to low histamine directly. And all these things can work together to kind of shift the tide out of this histamine overload which can be problematic for people. The final thing I wanted to discuss, because I think this is really important for people, all of your symptoms have improved. And they have remained improved for at least a few months. 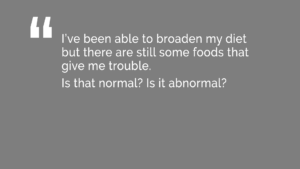 DrMR: Your most recent improvements now have been several weeks, but some of your improvements have now been for several months or at least a few months, I should say. And now, you’re struggling with, ok, I’ve been able to broaden my diet which is also great. So all your symptoms are improved, you’re able to broaden your diet, but there’s still some foods that give you some trouble. And you were wondering is that normal, is that abnormal.

And I understand this question. This is a question that plagues many patients, which is having a hard time dealing with a handful of foods that they can’t or can’t well tolerate at the moment. What I answered your question with was that’s actually normal, and it’s not abnormal to see many things improve and having the ability to eat a broader array of foods after this initial therapeutic period, anywhere from, let’s say, two to six months roughly speaking.

And I think that was very helpful for you to hear because it prevented you from thinking, Oh, my god, is there hydrogen sulfide SIBO or is it this or that? Because it can mess with your head mentally. So it’s important to understand kind of the greater context of how this typically presents.

Was there anything there that you felt people would benefit from hearing?

Catherine: Oh, just your reassurance was really helpful because I’m one of those people that loves to do research on the internet. It’s a good thing and a bad thing at the same time because you can constantly think that you’re not getting better or there’s always one more thing you can do. And maybe you are getting better and you just can’t see it; you need that reassurance.

And also, that knowledge that, yes, this does take time. There’s no magic pill you can take and you’re going to be 100% in a day or a week. So you just have to keep it up. 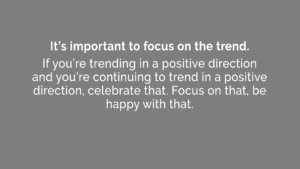 So, yes, it’s easy to focus on what’s not working. And again, context matters here. If you’re feeling generally unwell and you have one symptom that’s looking good, you don’t want to positive-think your way into a foolish situation where you’re focusing on one symptom that’s improved and the eight others are getting worse.

So don’t be a fool with how you look at this, but if all your symptoms or most of your symptoms are improving and your aggregate trend seems to be in a good direction, then take some solace in that and give your body some time and realize that sometimes those last couple of times that aren’t optimal may get there with just a little bit more time. That’s well said.

Anything you want to leave people with?

Catherine: Gosh. Just take care of your body and work with someone like Dr. Ruscio. This is the best I’ve felt in a very long time. I feel younger, but I’m getting older.

DrMR: That’s not a bad problem to have. It’s the best situation to hope for. And, yes, guys, I would say work with a clinician. Or there’s also my book, Healthy Gut, Healthy You, which has a self-help plan that can walk you through some of this stuff. 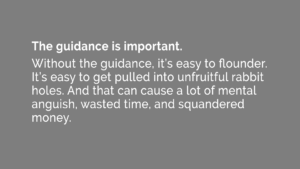 But the guidance is important because without the guidance, it’s easy to flounder. It’s easy to get pulled into unfruitful rabbit holes, and that can cause a lot of mental anguish, wasted time, and squandered money. So if we can prevent you from that, that is a huge win for all the parties involved.

Catherine, thank you so much for taking the time to speak with us today.

Catherine: Thank you. I appreciate it.

20 thoughts on “Not Improved After Clearing SIBO, What You Can Do – A Patient Conversation”