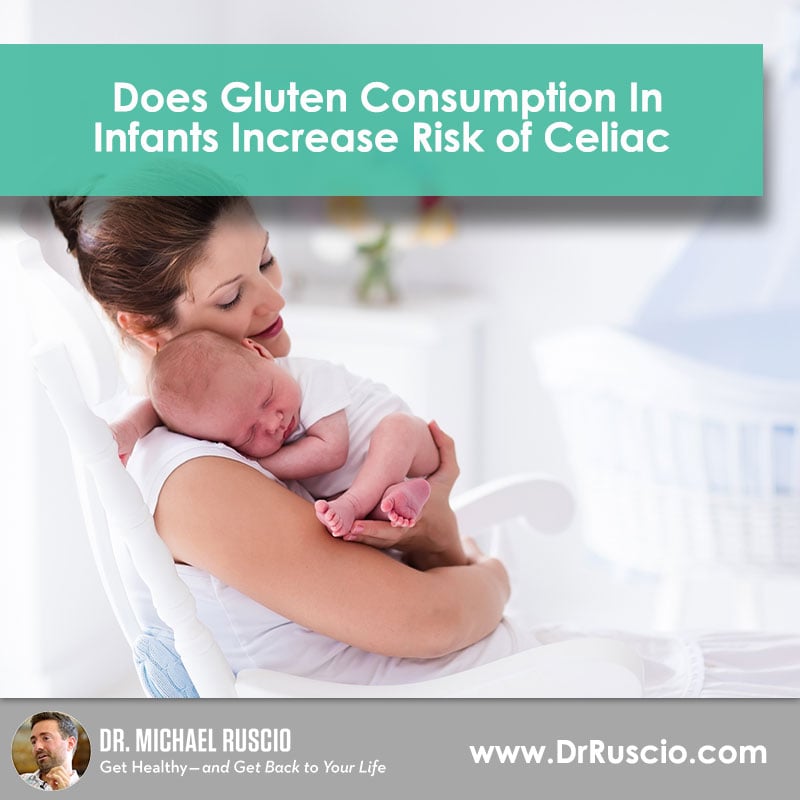 Does feeding your infant gluten increase their risk of developing celiac if they have a genetic predisposition toward celiac? Let’s discuss.

If you need help with a predisposition toward celiac, click here.

Does Gluten Consumption in Infants Increase Risk of Celiac?

Dr. Michael Ruscio: Does feeding your infant gluten increase their risk of developing celiac disease? Hi, this is Dr. Ruscio. And let’s discuss this question, because if you’re someone who is planning on having a child or you have a young child, you’re probably concerned about preventing celiac disease or other food allergies in your child. So this is definitely a question that is very practical and something that we want to take into consideration.

So a recent study was done looking at one large group that had the genetic predisposition to developing celiac, and they tracked if duration of breastfeeding or the amount of gluten that the children ate upon introducing gluten into the diet had an impact on development of celiac disease.

What they found was that duration of breastfeeding did not have an impact, but the amount of gluten did. The more gluten that was consumed at introduction, the more likely the infant was to be diagnosed with celiac.

The other, the amount of gluten tells us a few interesting things. One, it may just have been prolonging the inevitable, meaning eventually this child would have been diagnosed with celiac. And a larger amount of gluten may have just gotten you there more quickly because there was enough to provocate this appearing in the child’s system.

But there’s another piece here that’s very important which is, yes, it does seem reasonable, plausible that an excessive amount of gluten introduction may provocate celiac.

So the question then is, maybe if we consume less gluten, then that will be protective. Maybe if we consume no gluten at all, that will be protective. And it’s important not to fall into that line of thinking either, because there’s other evidence that shows the diligent avoidance of certain allergens including gluten may actually increase risk of allergy later in life.

Why is this? Because the immune system probably needs at least a small amount of exposure to foods during infancy to start to train the immune system so as to recognize it as a food or something that’s an allergen.

So while excessive consumption of gluten may provocate celiac in genetically predisposed infants, my thinking, which some of the research supports, is that excessive restriction or avoidance of gluten or other common food allergens like eggs and nuts may also increase the risk of allergy, because you need some exposure to these foods early in life, during infancy, while the immune system is forming and training so that the immune system can say, “This is a food” or “This is an allergen.”

We see this same thing happening with bacteria. When certain bacteria that can be dangerous later in life are exposed to a child’s immune system early in life, that bacteria can actually be beneficial and help to train the immune system.

So I don’t think we have all this sorted out just yet. And the immune system is very complex, so there may never be one simple answer.

But a few take-homes. The amount of gluten introduced into a child’s diet may have an impact on whether or not they will develop celiac. The more gluten, potentially the more likely that that diagnosis will be made.

However, on the other side of the coin, we don’t want to say, “Because more is bad, then less is going to be better.” Too strict of avoidance may deprive the child’s immune system the chance to recognize these particles and have the training that’s needed to be able to distinguish from a healthy reaction to an allergic reaction. So excessive avoidance may also be unhelpful.

So a small amount of a broad array of foods during the introduction phase of solid foods into a child’s diet may be the best approach.

This is Dr. Ruscio. I hope this information helps you get healthy and get back to your life. Thanks!

If you need help with a predisposition toward celiac, click here.