A study looks at the effects of feeding gluten to celiac-susceptible infants. While the results of the study are clear cut, taking action based on the results is not as clear. As always, Dr. Ruscio examines both sides of the story. 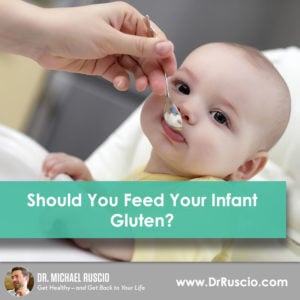 Should You Feed Your Infant Gluten?

Celiac disease is a genetic, autoimmune disorder characterized by a severe and self-damaging reaction to gluten. Gluten is a protein found primarily in wheat, barely, and rye, amongst other foods. When gluten is ingested by a celiac sufferer, the immune system attacks the small intestine and causes damage to the lining and villi, which may cause nutrient malabsorption and increase risk of related health conditions.

Anecdotally, celiac disease seems to be on the rise, but this may be due to the increased prevalence of testing, so more people are diagnosed. To properly test for celiac, a person must be eating gluten daily for a couple of months.

Symptoms of celiac vary and can include achy joints and gastrointestinal symptoms like belching, diarrhea, fat in stool, heartburn, indigestion, nausea, vomiting, or flatulence. It can also cause malnutrition, bone loss, and fatigue, as well as cramping, itching, rashes, or weight loss.

There is no known cure for celiac. The best way to manage symptoms is to avoid gluten-containing foods, supplements, and body care products.

Celiac disease is a hot topic these days. A study Trusted SourcePubMedGo to source was done in Sweden examining the effects of early nutrition in infancy on risks of developing celiac disease. The study was done with susceptible infants with a genetic or hereditary predisposition towards celiac. You can read the findings of the study here.

The infants in the study were all breast fed for 32 weeks and had their first introduction to gluten at 22 weeks. Those who developed celiac reported a larger intake of gluten than the control group.

The study concluded that the amount of gluten consumed before 2 years of age increases the risk of celiac disease at least twofold in genetically susceptible children.

While the Swedish study found the duration of breastfeeding had no discernible impact on the development of celiac in infants, other studies have contradicted this finding, showing that breastfeeding for a longer duration may decrease the risks of developing celiac disease, perhaps by strengthening the immune system.

Despite the findings of this study, following the other extreme is not likely to be helpful either.  Never feeding gluten to an infant may compromise the immune system’s ability to tell the difference between a food and an allergen. The immune system is trained in early life to recognize various foods through minimum exposure to that food.

The best approach in infancy, to avoid an allergic reaction later in life, is to expose the immune system to a wide variety of foods without overdoing any particular food.

This strategy applies to gluten, as well as other common allergens like eggs, dairy, or corn.
There’s a prevailing theory in the autoimmune world called the hygiene hypothesis, which is supported by epidemiological data. The theory states that lack of exposure to pathogens, infectious agents (such as parasites), and bacteria can increase likelihood of allergies later in life by stunting the natural development of the immune system. According to this theory, keeping an infant’s environment overly clean or sterilized can actually impair their immune tolerance.

So while the Swedish study warns that excessive feeding of gluten to susceptible children may speed up or raises chances of celiac, avoiding gluten altogether is not a better option.

Early life moderation, with gluten and other foods, is likely the best approach. One reason for this is that you can’t test for celiac disease if a person has not been regularly consuming gluten for months.

Babies or children who’ve never eaten gluten can’t be tested for the condition. Without a definitive diagnosis of celiac, it’s hard to motivate older children to avoid the temptation of gluten in grade school or high school years.