Naomi experienced great improvements in her migraines, hot flashes, bloating, and constipation. Going grain-free was very helpful for her. She had responded partially to going gluten-free, but then when cutting out all grains (namely rice), she felt even better. Naomi also had some bacterial and fungal imbalances in her gut in addition to female hormone and adrenal hormone imbalances. By addressing all of these, she responded wonderfully and no longer had any symptoms.

Dr. Michael Ruscio: Hi, this is Dr. Ruscio. I’m here with Naomi, who has had some great results in the clinic. And she had an interesting case. I kind of twisted her arm to sit down and talk with me about it for a few minutes.

But when you first came in—and correct me if I’m missing anything—but some of the biggest symptoms were migraines, hot flashes, and digestive symptoms – bloating, I think, and constipation were the two biggest ones, right?

DrMR: And the interesting thing about Naomi’s case was we convinced her to kind of go on a grain-free diet for a little while. And there was a lot of trepidation about going off of rice. I think rice was one of the ones that you were more concerned about.

Naomi: Right, because when I first started, the first diet included some grain. And then you wanted me to go no grain. And that was like, “Agh!”

DrMR: Right. So what was so interesting about her case was when we finally cut out rice in addition to everything else, that’s when the migraines really seemed to go away. And what I found really interesting was when you brought rice back in, you noticed you had a little bit of reaction. You had some bloating.

Naomi: Yes, I definitely had a digestive reaction.

DrMR: So I wanted to get this case documented because, not for everyone, but for some people, it’s not just the gluten-containing grains that are an issues. It’s kind of all grains.

Naomi: Yes. Well, I find I can eat buckwheat.

Naomi: And quinoa and millet, sorghum.

DrMR: And so you’re kind of going through that process right now of experimenting which ones will and which ones won’t.

Naomi: Right. And I don’t eat them much. 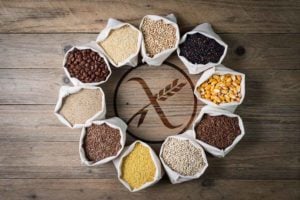 DrMR: Right, right. So an occasional treat kind of thing, but not part of the daily staple of the diet. Some of the other stuff that we had done with Naomi were clean out some gut microflora imbalances that we found, and then also did a little bit of hormone replacement therapy to get her balanced back out, along with some treatment to help vitalize her adrenals. And your adrenal labs pre- and post- really, really improved. And then the hot flashes, I think, are pretty much gone now.

DrMR: And the headaches are gone, unless you have alcohol, right?

DrMR: So only the self-induced headaches are still there. So overall, I think we’ve pretty much gotten rid of everything, right?

Naomi: Yes, I feel much better.

DrMR: So any comments or things that you’d like to share about what you’ve seen or observed instead of me just blabbing the whole time here? [Laughs]

Naomi: Yes. Well, I have to say when I first started the diet of eliminating grains, I thought, “Oh, my God. What am I going to eat for breakfast?” And I started eating a combination of fruits and nuts and seeds, which I really love. And I’ve really enjoyed the experimentation with foods of what I can eat and what I feel better not eating.

DrMR: Sure. Sure. Yeah, I think you’ve learned a lot about what works for your body throughout this whole process.

DrMR: So a great case with Naomi where the foundation was definitely diet and getting rid of some of the grains, and then also doing some work to support her adrenal glands and then balance out her female hormones. And digestive problems gone, energy a lot better, headaches gone, and she’s bulletproof. And now she can go drive her husband crazy.

So thank you, Naomi, for sitting down with me.