A systematic review (high level scientific evidence) recently found those with celiac may be at increased risk for SIBO. This SIBO (small intestinal bacterial overgrowth) might be the reason why some people don’t feel better after a gluten free diet. Fortunately there are some simple steps you can take to feel better if this is you.

The pooled mean prevalence of SIBO in Celiac was 20%

Healthy Gut, Health You lays out simple protocols to navigate this.

Dr. Michael Ruscio: Hi, this is Dr. Ruscio. And let’s discuss the association between small intestinal bacterial overgrowth (aka SIBO) and celiac disease. Now, one thing to be very aware of is if you have celiac and you go on a gluten-free diet and you don’t feel any better, what then? What can be causing that? 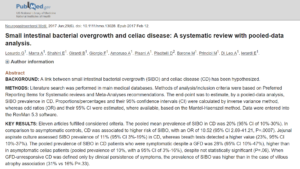 And so this paper—and I’ll put the abstract up here on the screen—entitled, “Small Intestinal Bacterial Overgrowth and Celiac Disease: A Systematic Review with Pooled Data Analysis Trusted SourcePubMedGo to source.”

So why this is important, why a systematic review is important is because it will look at a large number of studies and summarize those for you. It’s very easy to be misled by one study. You can find one study showing one thing, another study showing another thing. And then people argue back and forth about little bits and bites. Rather than doing that, it’s better to get an overarching look at what the data shows. And then you can look for a trend in the data.

So in this study, 11 articles were considered as part of the analysis. And the pooled analysis, the average, showed the mean prevalence of SIBO in celiac disease was 20%, so significant. And celiac disease was also associated with a higher risk of SIBO.

And to read you a few quotes here, “Did you know aspirate culture assessed a SIBO prevalence of 11% in celiac whereas the breath test detected a higher value of 23%?” So what does this mean?

Well, there are two main ways of assessing SIBO. One is through endoscopy and literally taking a sample from the middle section of the three sections of the small intestine, the jejunum, and analyzing the contents. It’s invasive and not really something that’s done in routine clinical practice because of the invasiveness.

Now, there’s also the SIBO breath test where someone could even take a kit home, breathe into this portable breath apparatus, and have an assessment for small intestinal bacterial overgrowth.

So this shows us that for patients who have gone gluten free and are still not feeling well, there is definitely a higher prevalence of small intestinal bacterial overgrowth. Will this account for every case of someone who has celiac, goes gluten free, and still has symptoms? No. But is this one thing to consider? Definitely.

And this leads to the conclusion. “The heterogeneity of available studies”—heterogeneity just means that there are differences in the studies. So it’s good when studies are homogenous, meaning they’re all the exactly same so we can really add those together and strengthen the data. But when studies are slightly different—there are different parameters; there are difficult set ups—they’re called heterogeneous, meaning you can’t add them together as much. You can’t add an apple to an orange. But you can add an apple to an apple.

So “Because of the heterogeneity of available studies may not support a relationship between SIBO and celiac disease”—so they’re saying even though these observations have been observed, the data here is not perfect because it’s a little bit disparate in terms of it’s not always an apple-apple study analysis.

But they continue. “Nevertheless, SIBO can be more common in celiac disease when symptoms do not improve after a gluten-free diet.” So at very least, we’re seeing the suggestion that there could be a connection between non responsiveness to a gluten-free diet and small intestinal bacterial overgrowth. 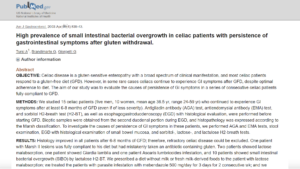 Now, I want to piece this together with something else. So this next study Trusted SourcePubMedGo to source—I’ll put the abstract up here on the screen again—assessed a number of patients for what could be causing their non responsiveness to a gluten-free diet in those who were celiac.

And I believe 10 patients of 13 assessed had SIBO. One had a worm. And two had protozoa, so different types of parasites. And, importantly, all of the patients after being treated with either deworming agents, anti-parasitic agents, or in this case antibiotics for SIBO saw improvements in their symptoms.

So this systematic review looked at the association and found, yes, there may be an association, although the data is not definitive. Then we take a trial in patients who have celiac who have gone gluten free and have not fully responded—treated them for the imbalances that were found, SIBO and parasites in this case. And we see every patient improve. So that’s very, very encouraging. 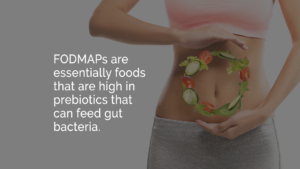 Now, there’s one other factor here to keep in mind, that some people who go gluten free will still have symptoms because of a dietary tweak that needs to be made. And this typically involves reducing dietary FODMAPs. FODMAPs are essentially foods that are high in prebiotic, that can feed gut bacteria.

And it would make sense that if we’re seeing a higher prevalence of SIBO in those with celiac. And if SIBO is a condition of bacterial overgrowth, if you eat a lot of dietary FODMAPs, a lot of these compounds that feed bacteria, you could actually feed the problem, make the problem worse.

Thus, those patients that go on a low FODMAP diet, eat a diet lower in these prebiotics, therefore starving the bacterial overgrowth, therefore improving their symptoms.

So if you’re celiac, and we could maybe even make the argument that if you’re non celiac gluten sensitive (meaning you don’t have a celiac diagnosis but you notice a clear problem with gluten) and you’re still having some symptoms after a gluten-free diet, then you may want to consider firstly a simple two-week trial on a low FODMAP diet. Secondly, treatment for any kind of gut dysbiosis or imbalances in the gut including SIBO or parasites.

Now, this is a lot. So what do you do when? In Healthy Gut, Healthy You, I lay out the exact sequences of steps you should take to try to sort this all out because if you do everything at once, you’re probably going to do more than you need. So having a sequence where you can take a step, reevaluate, take another step, reevaluate is very helpful in parsing through this as efficiently as you can.

So if you have celiac and you’re still floundering, small intestinal bacterial overgrowth may be one of the causative factors. And looking at that in conjunction with potentially a low FODMAP diet can definitely be helpful. So something to keep in mind.

This is Dr. Ruscio. And hopefully, this information helps you get healthy and get back to your life. Thanks.