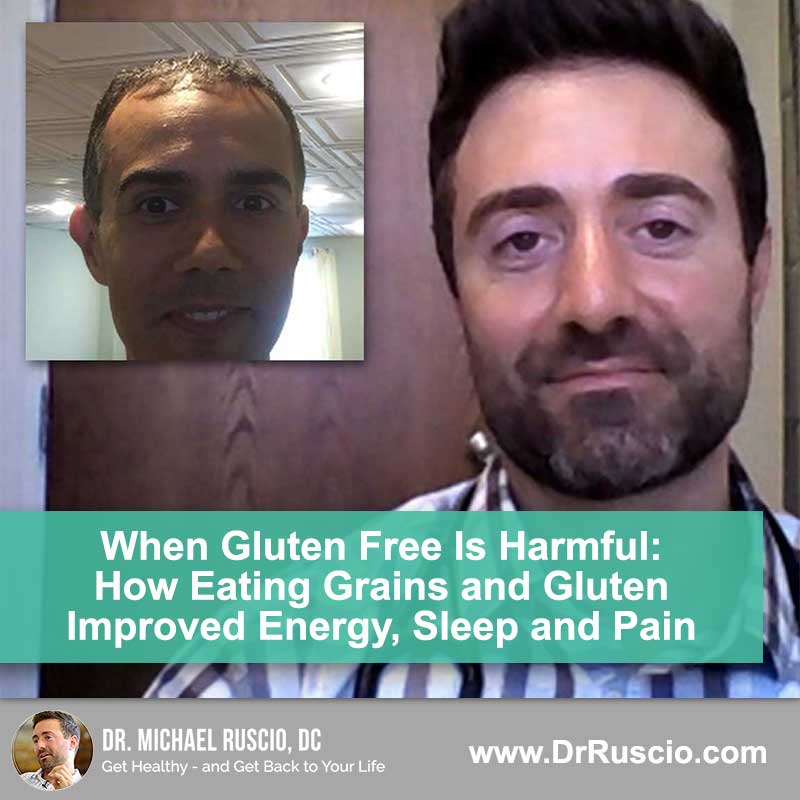 I continually try to provide you with reasonable, well-researched and balanced healthcare information. Recently I summarized a study which found the prevalence of non-celiac gluten sensitivity was between 0.6-6% of the population. I also commented that a gluten free diet is something anyone should experiment with via elimination and later reintroduction. Then to consume or avoid gluten depending on your level of reactivity. Some were critical of my advice, which baffles me, but upon further reflection I realized it is likely because these gluten-free-enthusiast are not seeing what I am seeing in the clinic.

I’d like to thank Randy for sharing his story with us today, showcasing what I am referring to. Randy initially improved from a lower carb paleo diet, however after years of this he was fatigued to the point of barely being able to walk up stairs, was suffering from insomnia, back pain and was underweight. He did require some natural treatments to heal his gut and thus allow him greater food tolerance (I detail this approach in Healthy Gut, Healthy You). Once his gut was healthier, we increased his intake of carbs, namely grains, some of which were gluten containing grains. What happened? Randy experienced the most marked improvement in his health within the last several years.

Had Randy been coerced by gluten free fear mongering he may have never made this vital dietary shift. Remember, listen to your own body, it will let you know if what you’re doing is right or wrong.

Dr. Michael Ruscio, DC: Hey, everyone, I am here with Randy. And he illustrates a very important concept; some people actually do better when they bring in more carbs, more grains, and even, God forbid, gluten into their diet. And this is a pretty cathartic maneuver we just made for Randy that was very helpful. And so I asked him if he will be willing to share the story because I know that there are other people who will benefit from hearing this.

So, Randy, thanks for taking a moment to talk with us.

DrMR: And there is a little bit of backstory. I don’t want to give too much of it away. I’d like you to kind of tell people your experience. But a couple of the things that I just want to lay the foundation with are, you came in with some preexisting gastrointestinal symptoms that you were struggling with. But, really, the main manifestations were being underweight, fatigued, insomnia, and some rashing, and some back pain. And you were trying to optimize your gut health to improve these things, which makes a lot of sense. And obviously,  is something, I think, that is well supported.

Eating Too Restrictive of a Diet

But when we had our first visit, I had a sense that you were eating too restrictive of a diet. 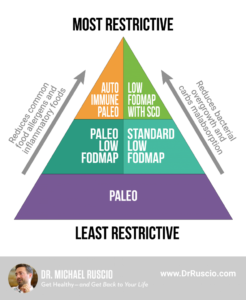 And you actually needed to increase your carb intake, increase your grain intake, and even flirt with some gluten-containing grains and see how you would do. And there is one other important piece of context here, which is, I think some improvements needed to be gained with your gut health so that you could tolerate carbs, because you were a bit carb intolerant. And this kind of led you a lower carb diet. Which had a little bit of utility, but you are kind of stuck in this low carb land. And you were becoming fatigued and underweight. And when we helped to improve your gut health, that opened the door for you to be able to eat more carbs. And now, after eating more carbs, clearly marked improvement in only a few weeks after upping your carbs, upping your grains, and even having some gluten.

So that’s the relevant context I wanted to lay. But please tell us a little about your experience and what you’ve noticed.

Randy: Yes. So, like you said, for the past three or four years, I have been on a Paleo diet, very low carb. For the past year or so, I have been pretty much in the ketogenic zone of 50 to 20 carbs per day. And within the past just five weeks, I’ve tried increasing my carb intake by adding in things like potatoes, rice, spelt, oatmeal, and wheat. And the benefits I have seen is, I’ve went from having no energy at all; from having difficulty walking up a flight of stairs on days, to now having greatly improved energy. Strength has greatly improved. I’ve picked up 10 pounds, which is the first time in the past five or six years I’ve seen the scale move in the right direction for me. And the rash almost completely improved. The chills I was having completely diminished. So I’ve seen a lot of success with just changing my carbohydrate intake.

DrMR: And you were saying also your wife is happy because you have more energy? And you also were able to power wash the deck? Which from being barely able to walk upstairs, now being able to power wash a deck, in only three to four weeks’ time, is pretty remarkable.

Randy: Right. She is happy with my newfound health also. I’ve stained the back deck. Pressure washed the house. And most importantly, I can play with my eight-year-old son now. I can almost keep up with him.

DrMR: Never probably fully be able to keep up, but we’ll try, right?

DrMR: So, I mean, that is fantastic. I’m, of course, elated to hear that you’re feeling better. And I really wanted to capture this. Because in light of the recent video that we published about the prevalence of non-celiac gluten sensitivity, wherein we showcased how, yes, it is a legitimate condition; but the prevalence is probably lower than most people have been led to believe, likely somewhere between 0.6 to roughly 6% of the U.S. population.

Some people had a hard time with that and wanted to counter me with reasons why no one should ever have any gluten. And it is interesting that I’m in this position of having to defend eating gluten, where I am actually a proponent of everyone at least trying a gluten-free diet. But the other aspect on this conversation that I think eludes some people is cases just like your own, where people were clearly making themselves ill because their metabolism needed more of a carb intake.

Now, is it the gluten that is helping you? No. It’s the carb intake. But one of the things that will make your carb intake easier is allowing you to have some gluten. And certainly, I’m guessing at certain social functions or if you’re on the go, you can’t always procure a gluten-free carb source. And so it is nice to have the leeway to be able to eat some gluten.

And so I think, at very least, just understanding that some people can eat grains and gluten and actually become healthier in the process. And Randy is just a shining example of that. 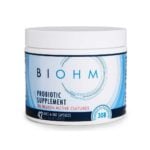 Hey, everyone I’d like to tell you about BIOHM, who helped to make this podcast possible. Now, BIOHM offers a line of gut-healing products, including a probiotic, a prebiotic, and a greens powder. Now, their probiotic is interesting in the sense that it combines strains from both category 1 and category 2.

And if you go over to BIOHMHealth.com/Ruscio and use the code RUSCIO at checkout, you’ll get 15% off your first order. So BIOHM, they’ve got a good line of probiotic and prebiotic and the greens powder, all to help you improve your gut health, which we know has such massive and far-reaching impacts. So check them out over at BIOHMHealth.com/Ruscio.

DrMR: Randy, as we kind wrap this thought up here, are there are any other observations or items that you’d like leave people with?

Adding Gluten Back Into Your Diet

Randy: I definitely can attest that I’m one of those that avoided gluten for years. And after adding it back in, one of the positive aspects is I can now eat at restaurants along with my family and friends.  And have that improved social aspect of my life also. 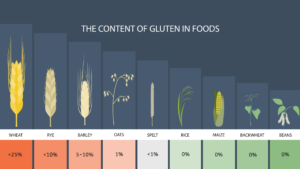 DrMR: Absolutely. Absolutely. And again, to be clear for people, if you have eliminated gluten and then reintroduced it, and you’ve clearly, subjectively identified that you have a problem with it, then I would recommend—and I think anyone reasonably would agree—to avoid gluten to the level of your intolerance. But then often times it’s left out. And we cite just the evidence showing that gluten is bad and then we conflate that to the whole population.

And in your case, Randy, we didn’t have to do mitochondrial testing, adrenal testing, hormone testing, any of that. All we need to do is identify one of the pillars of health, which is your diet. Optimize for that. And now you are almost keeping up with your eight-year-old. You’re power washing the deck. The missus is happy.  So happy wife, happy life. And everything seems to be moving in the right direction.

DrMR: Awesome. Well, thank you again, Randy, for taking the time. I think this video will hopefully help a lot people. Congratulations on feeling so much better. And again, just thank you for the openness to share this to people.

Randy: And thank you, Dr. Ruscio.

12 thoughts on “When Gluten Free Is Harmful: How Eating Grains and Gluten Improved Energy, Sleep and Pain – A Patient Conversation”