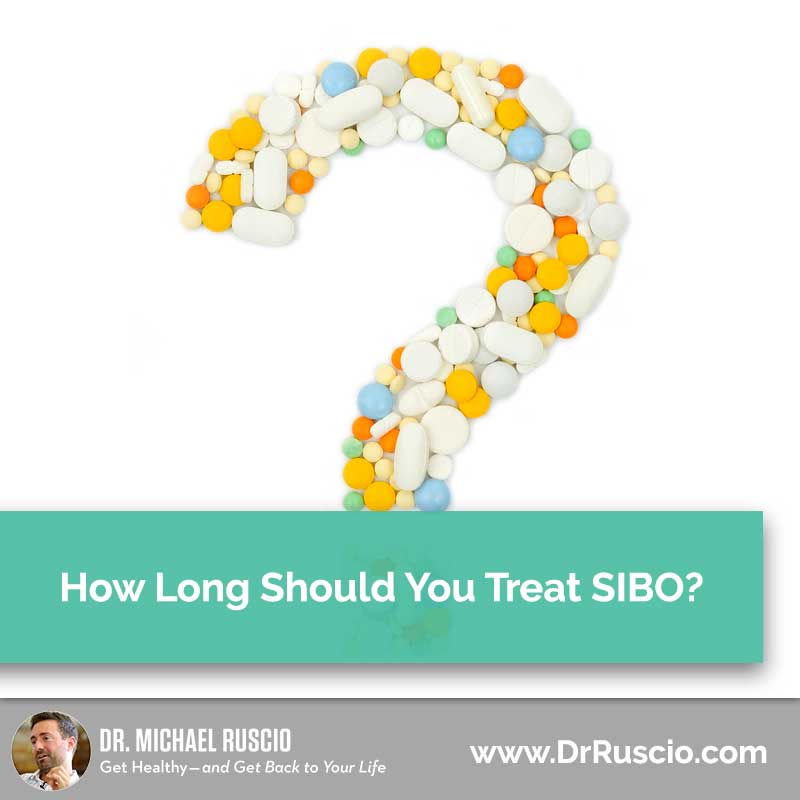 SIBO (small intestinal bacterial overgrowth) is a common cause of gas, bloating, constipation, and diarrhea. It can be treated with antibiotics, herbal antimicrobials, or a liquid elemental diet. The SIBO antibiotic is often given for two weeks. However, a recent study has shown this may not be the ideal approach for most patients and that one’s SIBO lab values can help determine the ideal use.

Dr. Michael Ruscio: Hi, this is Dr. Ruscio. And if you’re a patient that’s been diagnosed with SIBO—small intestinal bacterial overgrowth—which can typically manifest as the symptoms of IBS, including but not limited to gas, bloating, and either constipation, diarrhea, or abdominal pain, then you may be wondering what the ideal treatment length is.

DrMR: Now, there are different treatment options. Two of the most used, I guess you could say, would be pharmaceutical antibiotics or herbal antimicrobials. And a recent study actually gives us some very valuable information in guiding how long to use the antibiotic Rifaximin in the treatment of SIBO. And this was a study predominantly looking at those with SIBO that had an IBS-D or an IBS diarrheal type presentation. 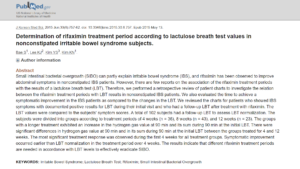 So, in short, what this study showed was that the higher one’s labs values may predict the longer need for treatment duration on this antibiotic. Now, more specifically, these researchers tracked a large group of patients. And the patients ended up being on either four weeks, eight weeks, or twelve weeks of Rifaximin.

Now, typically, a Rifaximin prescription is written for a two-week duration. So this is definitely quite a bit longer than is typically recommended. However, this is also a drug being used in a new application. So I still think we have much to learn.

So instead of the typical two weeks, these researchers found that the higher level of severity of the SIBO test, the SIBO breath test, that predicted if one would need Rifaximin for four weeks, for eight weeks, or even as long as twelve weeks.

Now, this, I think, provides us a few important things. One is the personalization of the dose. And I think that’s probably the most practical here because what we want to try to do is use a duration of treatment that’s going to have the highest likelihood of success—not too much, not too little.

Now, there’s another interesting finding from the study, which was that patients’ symptoms tended to improve before the labs improved. And why I think this is important is because it points to something that I think is a very important part of the clinical process, which is sometimes left out of modern day medicine or modern day health care, which is really having a strong concern for the way a patient is responding to treatment.

What this study again showed was that a patient will start to respond symptomatically before their labs improve. And so this may suggest that using the patient response to dictate the length of treatment and the retesting interval may be important. 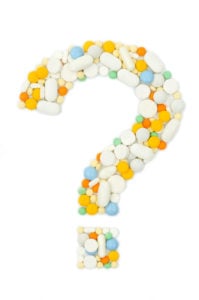 And there’s one other interesting point from this study, which was that someone’s severity of symptoms did not correlate with the severity of the labs. And I think this is important to mention because people can have problems in the gut. Or I should maybe say it this way: a problem in the gut could manifest as many different types of problems for different people and also different severities of problems.

So it’s important, I think, to keep this in mind where my personal opinion is that a problem in the gut can manifest in many different ways. And this is why it’s an important thing to evaluate digestive health before other considerations. And what this study is showing is that the severity of SIBO may not always correlate with the symptom severity. So someone may have a very mild case of SIBO but very severe symptoms, or very severe SIBO but very mild symptoms.

So this study provides some very interesting information. I think the biggest takeaway is that we may want to rethink or at least consider a longer duration of Rifaximin use in the treatment of SIBO, especially if a patient has a very high gas level on breath testing.

So this is Dr. Ruscio. Hopefully, this information helps you get healthy and get back to your life. Thanks.

316 thoughts on “How Long Should You Treat SIBO?”