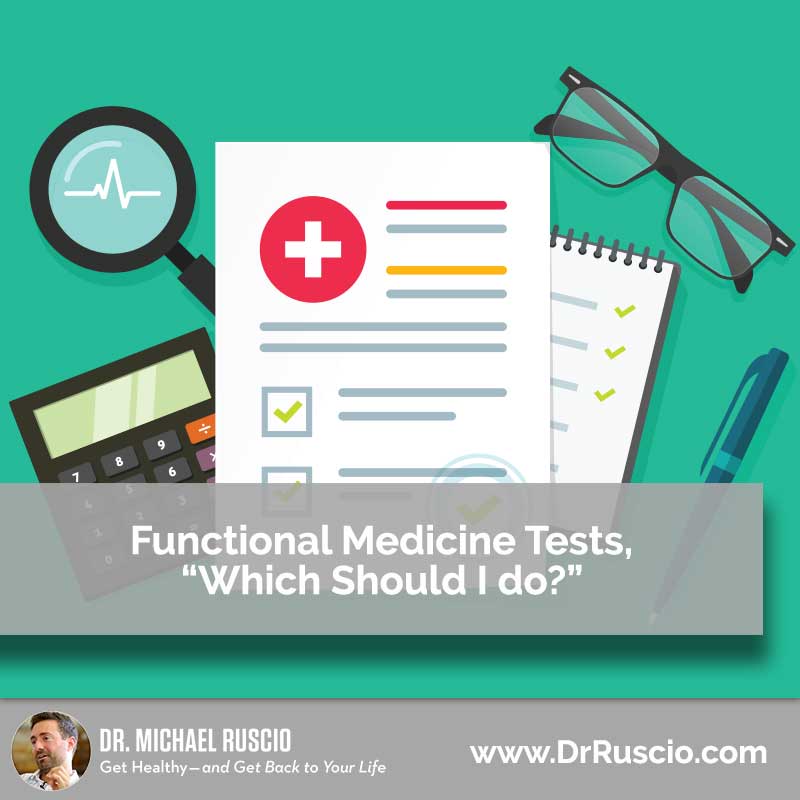 Here is a great question from our audience.  To paraphrase,

“My new functional medicine doctor has recommended 7 tests, costing over $5,000.  Which of these tests do I really need to do?”

Let’s discuss the specific tests recommended and identify which to run and which to avoid.

How much testing is too much?

Dr. Michael Ruscio: Hi, this is Dr. Ruscio. Let’s discuss a listener question of a gal who is trying to evaluate, here is a local functional medicine provider in my town. Here is the recommendation that I’ve been given in terms of the initial visit, and the initial testing and treatment recommendations. Is this what I would consider excessive, or reasonable.

And it’s a great question. It’s a question that I think needs to be asked more, both by the provider and by the patient because overly expensive functional medicine is not really helping anyone. I have argued for a while now that it does not help the patient, because it throws up unnecessary financial hurdles. And it does not help the provider, because it also throws those hurdles at patients which are trying to get help through their offices.

This premise really depends on a key finding, which is that additional testing and treatment does not produce better results. Some testing, and some treatment, of course, produces results. But we very quickly see this law of diminishing returns come into effect. And the diminishment of results. In fact, I’ve even gone so far as to argue that too much testing can actually make results worse, or harder to obtain. Because you introduce more variables into an already variable-rich process, which is a clinical process. Thus making it hard to obtain results.

So let’s look at a real-world question here to help illustrate what the appropriate amount of testing and treatment looks like. And when we traverse over a line into excess. And I’ll put the question up here on the screen, and also narrate it.

“Dr. Ruscio, I should preface this question with, I’ve become an avid podcast listener. I enjoy the journal reviews, and appreciate the breakdown of data and research so that it is understandable for the common person. So thank you. I’ve been feeling unwell for quite a while. I’ve seen my PCP, primary care physician, two gastroenterologists, and had numerous tests and loads of blood work done. My friend suggested a functional medicine practice here in New York City.

The price of a visit was very reasonable, the lab work he recommended was not. He’d like me to have the LRA test done, which is $2500, a Heidelberg test for $700, test my free T3, that’s fairly inexpensive, cortisol you’re looking at maybe $200-300. Candida, depending on the test there may be a few hundred. And histamine, again, likely fairly inexpensive, but may be anywhere from $50 to $60 up through a couple of hundred.

He recommended his lab, his gut, his vitamin packet of $500-$600. What he’s recommending will cost close to over $5000. He diagnosed me with SIBO without a diagnostic tool. I’m scheduled for a hydrogen breath test with my gastroenterologist in two weeks. I guess my question, is this typical functional medicine protocol? Is the LRA test important? Do you really need to know all my environmental allergens?”

I should mention the LRA test proports to be a comprehensive assessment of allergens.

“To treat my undiagnosed Hashimoto’s or SIBO? Is this considered best practice in the functional medicine world? Thank you in advance. Elka Arnold.”

No, I would not say this is part of the standard functional medicine paradigm. And it’s important to understand that we don’t have to perform every test that we could possibly rationalize performing right out of the gate. And the reason for this is because there are some foundational factors that will remedy the other symptoms present. Thus, making it obsolete to have run those markers. The histamine is a good example. If you find dysbiosis, and this has not been published. This is more so my theory. But I think this will absolutely be published at some point. And we have some inferential data we can use to support this statement. But when someone has dysbiosis, let’s say they have small intestine bacterial overgrowth. Dysbiosis is just a broad term that we can organize many different imbalances underneath. Like candida, SIBO, H. pylori, what have you.

If someone has dysbiosis, remedying that, or rectifying that dysbiosis, will improve their histamine levels and their histamine symptoms. I’ve seen that routinely. We also, coming back to the inferential data, have studies that have shown that a low-FODMAP diet, as an example, can cause an 8-fold reduction in histamine levels, and also other interventions most namely glutamine, which is reparative to the gut lining, can help reduce histamine also. So you could test for histamine, however, if you do a good job with cleaning up someone’s gut, you should see histamine or histamine-like symptoms improve.

We’ve discussed previously that your mouth is the first section of your gut. So in order to have a healthy gut, you have to have a healthy mouth. That’s why I like Quip’s Electric Toothbrush, which is ADA approved. That’s the American Dental Association.

Quip provides an effective, two-minute cleaning with vibrations and guiding pulses that will alert you to when to switch sides. The timed guiding pulses combined with the soft bristles help prevent over-brushing, which can be a serious contributing factor to gum disease. And I can personally say that this has helped me.

DrMR: Another point here is adrenal testing. I do not think adrenal testing is something that really tells us anything about where the source of the problem is coming from. We reviewed a while ago a systemic review that looked at adrenal testing, and found it to be highly inaccurate. In fact, over 50% of the time, the adrenal test results did not correlate with a patient’s symptom scores. So that’s another test we could check off of this list.

The Heidelberg gastric acid analysis is nice in theory. If I could say would I like to have that data or not with the wave of a wand, I would say yes. But knowing the expense that that is going to subject someone to in this case, I believe it was $700, it makes me look at that much less favorably. Also knowing that you can, through a little bit of trial and error or empiric experimentation determine if someone needs or does not need hydrochloric acid supplementation, it further decreases, I think, the need for that.

Free T3, another example of something that, if you improve someone’s gut health, you will improve their conversion of T4 to T3, both through the gut having direct conversion ability itself and through reducing inflammation. Which will impair conversion in the periphery. Now, I would give your clinician the benefit of the doubt, and have this conversation with him. Say, “I don’t have the financial resources, nor the desire, to undergo this testing.” And I would use the 80/20 rule back at him. If you remember, I made an appeal to patients to try to do an 80/20 analysis before they go into a visit. To consolidate to the 20% of their questions that carry 80% of the importance.

I would ask your clinician to do the same thing. I would ask your clinician to focus on the 20% of testing right now that they feel carries 80% of the value and focus on those. If you do that, then hopefully they’ll steer at the right 20%, and be able to find the most profound causative factors that will make these other assays and assessments obsolete.

And yes, this is a great question, Elka. This is something that’s albeit maybe some people think I’m overly critical of functional medicine, but it’s these sorts of realities that patients are confronted with every day that make me so judicious about picking out these cases and helping people not to get wrapped into this.

For someone who has a large pile of disposable income, it’s probably not going to be a huge deal one way or the other. But for those who don’t have that luxury, we should be more discerning and selective with the tests that we run. And it will not detract from your results. That’s the one point I really want to emphasize. You do not need to perform more testing to get better results.

If you’re sick and you’re motivated because of that sickness, it does not mean more testing and more data would get you the symptomatic improvements that you so desperately desire. That’s not the way that this works, unfortunately. So give your clinician the benefit of the doubt. Have the conversation with him. If they’re unwilling to work with you, then I would find someone else.

This is Dr. Ruscio, and hopefully this information helps you get healthy and get back to your life.

20 thoughts on “Functional Medicine Tests, “Which Should I Do?” – Listener Question”