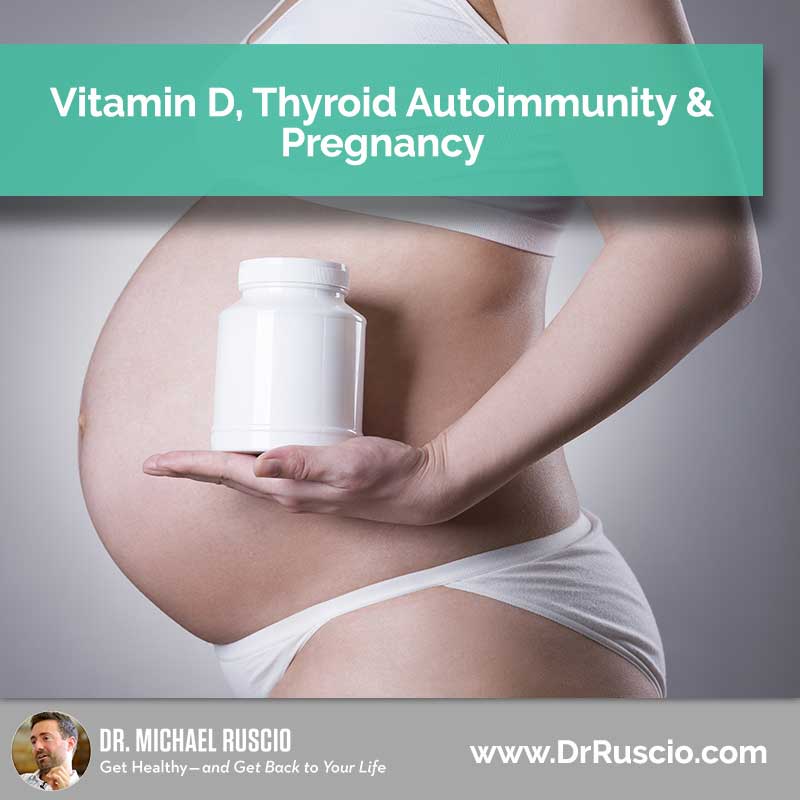 The effect of vitamin D on thyroid autoimmunity in non-lactating women with postpartum thyroiditis.

Could Vitamin D Help to Lower the Thyroid Antibodies Associated with Thyroid Autoimmunity?

What Does This Mean?

And again, this group of researchers wanted to simply assess if vitamin D could be effective for helping to lower the thyroid antibodies associated with thyroid autoimmunity. Now, the thyroid antibodies, most namely TPO, or thyroid peroxidase is a blood test that your doctor can run to assess the severity of the autoimmune process. So let’s look at a few of the particulars here.

You see that, and I’ve highlighted for you in yellow the thyroid peroxidase antibodies, which are probably the most salient to this conversation. And you see that in vitamin D deficient women, who were given the 4000 IUs per day, there was almost essentially a halving. A reduction of 50% of the thyroid antibodies, the TPO antibodies. Whereas the vitamin D sufficient women who were given 2000 IUs per day still saw a notable and significant improvement, but it wasn’t quite as much as the women with preexisting deficiency. And then finally, you see that the women that had no treatment did not have a significant shift in their antibodies.

So what does this mean? Well, again. Optimizing vitamin D can help with the immune system and thyroid autoimmunity. And those who are deficient are more likely to benefit. And also keep in mind that other therapies have been shown to be helpful. A healthy diet. We’ve reviewed one study in the past that showed a 40-44% reduction in these TPO antibodies when using a diet that was essentially a moderate carb diet. So it restricted dietary carbohydrate to about 200 grams a day. It had people avoid things like breads, fruits, rices, cereals, pasta. And focus on vegetables, healthy fats, and meat. And certainly that’s noteworthy.

Also supplemental magnesium, selenium, and Co-Q10 have been shown in other studies that we discussed to help with thyroid autoimmunity. Most notably there is some information that suggests the benefit of selenium is achieved by three months; and then by 6 months the benefit really drops off. Which again, may hint at the fact that a repletion of a deficiency or a subtle pseudo deficiency may be what underlies the benefit. Meaning, it may not be something you need to take forever.

Also, there’s been one study, and while not all the data agree here, that the treatment of H. pylori can help decrease thyroid autoimmunity. Also there’s been a connection, not a treatment. There’s no treatment data, but there’s a connection between those who have hypothyroidism having a high incidence of small intestinal bacterial overgrowth. I’ve certainly seen in the clinic that when we treat small intestinal bacterial overgrowth, if nothing else, a patient is able to take less thyroid hormone medication. Probably predominantly because they have increased absorption of that medication. But it’s nice nonetheless, to have someone on less medication.

And finally, remember to manage stress. There’s some evidence suggesting that stress via another hormone called prolactin may exacerbate autoimmunity. So, again, in this study, it was shown that vitamin D supplementation can help with thyroid autoimmunity in postpartum Hashimoto’s thyroiditis women. The effect is likely more pronounced in those with a preexisting deficiency, which makes sense.

This is Dr. Ruscio. Hopefully this information helps you get healthy and get back to your life. Thanks.