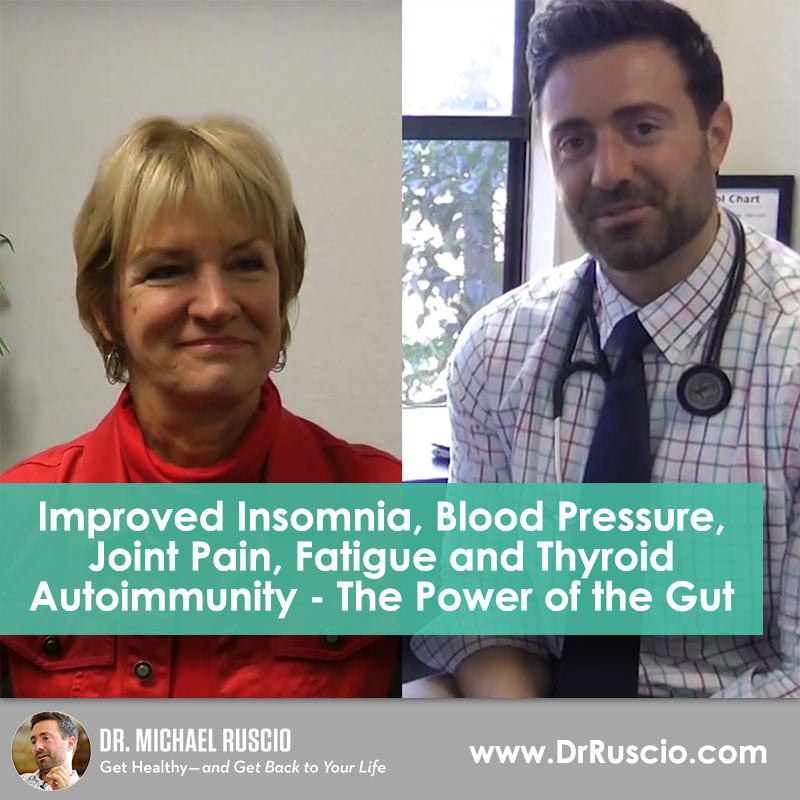 Dr. Michael Ruscio: Hi, everyone. This is Janet, who recently had some good results at our clinic. And Janet, would you mind sharing your story with us?

Janet: No problem. I’ve been going to see Dr. Ruscio for about six or seven months now. When I started out, my most severe problem was lack of sleep. It’s been ten plus years that I have not been able to sleep at all. I would go to sleep, let’s say, for an hour, and then I’d be up, maybe, for the rest of the night. Or I’d get back to sleep after two or three hours and sleep for half an hour. And it’s very debilitating.

So I’ve tried everything. I’ve been to sleep clinics. I’ve tried all kinds of natural and unnatural medications. And nothing seems to work. I also had severe heart burn with kind of a knot in the chest type feeling, as if I thought I was having a heart attack. I’m on blood pressure medications, but I would like to get off of them. Since I started, I’m on half dose now, and I’m now going on the no dose.

And I seem to be doing very well. I also had lots of joint pain. If I were sitting on a plane or gardening or something like that, I could barely move after a short period of time. I also had a low energy slump in the middle of the afternoon, where I just was so tired I couldn’t go on. And I would go to lie down, and then of course I would be wide awake. So that wouldn’t work either.

So when I started seeing Dr. Ruscio, he did some testing and found out that I had a very severe case of Hashimoto’s. I had been on thyroid medication, but it just was never detected before. I also had anemia, a fungal growth in my intestines, and a hormonal imbalance, which I kind of figured I did have. So since I’ve been going to Dr. Ruscio, I have to admit I feel fantastic. I am sleeping at night. Occasionally I wake up maybe once, maybe twice, but I go directly back to sleep. As I said, I’m almost off my blood pressure medications and seem to be doing well with that. My heartburn has subsided. My energy is wonderful. It’ll be like five or six o’clock now where I’ll realize, “Wow, I haven’t been tired all day long.” And it’s very, very nice. And the thyroid problem seems to be in check. So basically I’m just very pleased that we could do something with the cause of problems instead of just putting a Band-Aid on with medications. And it’s been very successful.

Dr.MR: Great. Well I‘m very happy that you’ve done so well. And do I have your permission to share this with doctors and students in the public?