Intestinal bacterial overgrowth has been shown to increase the risk of coronary artery disease.  The good news is there may be a simple way to protect against this by utilizing probiotics which have anti-bacterial overgrowth effects.  Let’s elaborate.

Dr. Michael Ruscio, DC: Hi everyone. This is Dr. Ruscio and let’s discuss the heart disease/gut connection. I want to share with you a study, and I’ll put the abstract of the study up here on the screen, entitled, “Association Between Small Intestinal Bacterial Overgrowth by Glucose Breath Test and Coronary Artery Disease.” Trusted SourcePubMedGo to source

DrMR: So let’s go through some of the details. A total of 1059 patients were tested for SIBO and via coronary artery angiography—so essentially getting an assessment of the health of the coronary arteries. And their results were quite striking. Coronary artery disease was detected in essentially 80% of those with SIBO compared to essentially 40% of those without SIBO. So that’s a very significant jump. It’s essentially a doubling of risk. And there was also an increased prevalence of diabetes, chronic kidney disease, blood pressure lowering agents and cholesterol lowering agents in the patients with SIBO compared to the patients without SIBO.

And to quote here, again,

“Patients with SIBO had an increased number of coronary arteries affected compared to SIBO negative patients.”

So those with SIBO had more damage and blockage of their coronary arteries than those without SIBO. Now, there’s another thing here that I’ll put up here on the screen. And this may sound a little bit complicated. But I’ll quote again,

Essentially, what that means is the researchers were trying to separate out for if the diabetes or the kidney disease or the use of high blood pressure lowering agents because one had high blood pressure or cholesterol lowering agents because one had high cholesterol were the reasons that the people with SIBO had the decreased health of their coronary arteries.

And what they found was that even after isolating all those variables out and controlling for just the association between SIBO and coronary artery disease, SIBO was still a significant contributing factor to the decreased health of coronary arteries.

And so their conclusion,

So that’s, I think, another area where we are seeing the gut have such a far-reaching effect to many systems of the body, in this case, your cardiovascular system.

Now, I want to tie this in with probiotics. We’ve covered—and I’ll put a few links in here. And we know that a few high-level scientific analyses have been done showing that probiotics have the ability to lower cholesterol. So there may be more than just the ability of probiotics to lower cholesterol. It may be because probiotics can clean out SIBO that they may have a potential benefit for heart disease. 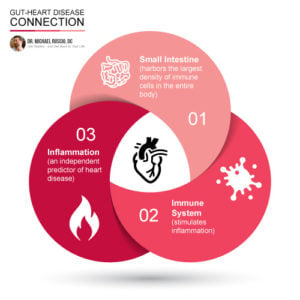 And I also wanted to draw a connection between your heart, your coronary arteries, and your gut. We know that an independent risk factor for heart disease is inflammation. And we know one of the main instruments used by your immune system is inflammation. Or the immune system is one of the predominant reasons for having inflammation released in the body. And we know that the largest density of immune cells in your entire body resides in your small intestines.

So some of these connections here, some of these inferences, have yet to fully be proven. But that certainly is a mechanism that I think is plausible. So we’ve talked about the association, at least according to this one study, between coronary artery disease and small intestinal bacterial overgrowth. We’ve discussed how probiotics Trusted SourcePubMedGo to source can lower cholesterol and how probiotics can be a treatment for small intestinal bacterial overgrowth. And we’ve talked about the connection between your heart (or said more definitively, more specifically, coronary artery disease) and your gut via the immune system and inflammation as the connecting piece.

Now, there are a couple counterpoints here I should point out before we get too carried away with the potential utility of the gut-heart connection. And that is, we don’t really have good outcome data showing that interventions that improve one’s gut health will decrease the incidence of coronary artery disease. So there’s more here to be documented.

Would improving your gut health in any way harm your heart? I very much so doubt it. I would only be inclined to think as long as the intervention for the gut was reasonable and low risk, something like probiotics, a low FODMAP diet, what have you, that you would only stand to gain from that.

Also, IBS (irritable bowel syndrome)—abdominal pain, altered bowel function, constipation, diarrhea, bloating—has not been shown to increase, at least to the best of my knowledge, the incidence of heart disease—heart attack, stroke, coronary artery disease, cardiovascular episodes. So that’s a good thing. But it also may be a bad thing. It may also indicate that even if one improves their IBS, there may not be any spillover benefit to one’s heart health.

However, I think it’s prudent to say that improving the health of your gut may give you benefit for your heart and certainly has no downside as long as you’re using noninvasive therapeutics to that endpoint.

So this is very interesting. We’re seeing a connection between the coronary artery health (obviously very important) and small intestinal bacterial overgrowth, the gut. And hopefully, this information will motivate you to take your gut more seriously. And this information will also help you get healthier and get back to your life.

Here’s a more recent study that has similar findings about SIBO and coronary artery disease:

In this small study, 19 patients with coronary artery disease were compared to 10 healthy controls. A breath test showed the following SIBO infection rates:

Researchers also noted that, for those individuals who tested positive for SIBO, hydrogen levels were much higher for the patients with coronary artery disease.