SIBO (small intestinal bacterial overgrowth) is a condition of excess bacteria in the small intestine.  Can taking a probiotic make this condition worse? One study suggested yes. However, this study is very misleading.  Let’s discuss an accurate summary regarding probiotics and SIBO.

No, probiotics cannot cause SIBO

However, there is a wealth of data showing probiotics can help both IBS and SIBO

Can you react negatively to probiotics?

Dr. Michael Ruscio: Hi, this is Dr. Ruscio. Let’s discuss the question, can probiotics cause SIBO? In short, no, probiotics cannot cause SIBO. And this is not something that you should be concerned about. However, what I’d like to do is outline what could be a confusing data point in this question and provide you with some tools to help you navigate through it.

So can probiotics cause SIBO? The short answer is no. We have meta-analyses which are arguably the highest level of scientific evidence showing that probiotics, in fact, can treat and act against and clean out small intestinal bacterial overgrowth in the intestinal tract.

However, I have received questions asking or commenting, “I’ve heard probiotics can cause SIBO and that I shouldn’t take them.” So let’s navigate through all these bits and bites. 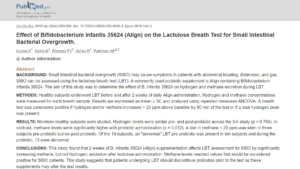 So I’ll put the abstract up here on the screen of the study in question that’s generating some of the confusion. And unfortunately, this study has been referenced, in my opinion, very irresponsibly and has done nothing other than contribute to confusion and detract from people becoming healthier. It does not mean that people may not have negative reactions to probiotics. They’re rare. But they do happen.

But this study entitled, “Effect of Bifidobacterium infantis (or Align Probiotic) on the Lactulose Breath Test for Small Intestinal Bacterial Overgrowth Trusted SourcePubMedGo to source.” Let me read you a few of the details or quotes. “A rise in methane of over 20 parts per million [ppm]”—so to diagnose SIBO (or small intestinal bacterial overgrowth), we use a breath test. And a rise of over 20 would be considered a positive for bacterial overgrowth. This was seen in three subjects pre probiotic administrations, or before they administered the probiotics, but in six post probiotic. So this affected three of the 19 subjects being studied.

So you took a group of essentially 19 people. And the probiotic appeared to cause SIBO or a positive breath test in 3 people of 19 in one study.

Now, you can find a study to show almost anything. This is why I’ve said several times you should not use one study to inform your decision making. You should look at what the body of evidence shows at large. 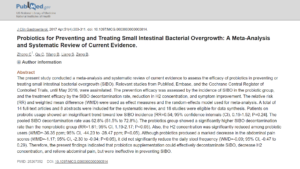 So when we look at numerous clinical trials with larger numbers of people—now, we’re talking about hundreds, maybe even thousands of people—we see the overall effect of probiotics on SIBO is an anti-SIBO effect and also an anti-digestive symptom effect. 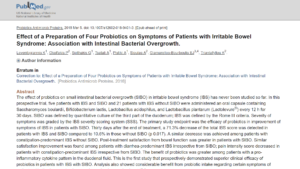 So while one study, yes, has shown three people may obtain SIBO after using a probiotic, the overwhelming majority of data show that both probiotics can act in an anti-SIBO fashion, and probiotics can help to alleviate digestive symptoms.

We’ve discussed previously that your mouth is the first section of your gut. So in order to have a healthy gut, you have to have a healthy mouth. That’s why I like Quip’s Electric Toothbrush, which is ADA approved. That’s the American Dental Association.

Quip provides an effective, two-minute cleaning with vibrations and guiding pulses that will alert you to when to switch sides. The timed guiding pulses combined with the soft bristles help prevent over-brushing, which can be a serious contributing factor to gum disease. And I can personally say that this has helped me.

Now, that doesn’t mean that no one can have or will have a negative reaction to probiotics. There is a small subset of people who negatively react to probiotics. This is why in my book Healthy Gut, Healthy You I outline a 3-category system of probiotics so you can try one probiotic from each category to see what category of probiotic has benefit for your gut. And rather than just trying the litany of products out there, you can understand category 1, category 2, category 3. And you can try one probiotic from each. 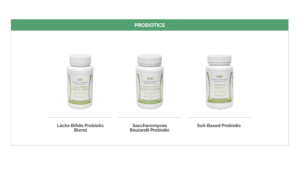 So it’s really important to understand that information can be miscited. And someone could, in this case, be concerned that a probiotic might be bad for their gut or bad for their SIBO because of one study and this study showing an effect—in this case, a negative effect—in three people. It’s very important to weight that against the hundreds if not thousands of people who have shown benefit from probiotics, both for SIBO and for digestive symptoms, as is summarized in systematic reviews and meta-analyses that we have available.

So be cautious with what you read on the internet. And I would make sure to filter things that you hear through someone whose opinion you trust because it is important. And information used incorrectly can actually detract from your health rather than contributing to your health.

So probiotics can help with SIBO. And I would have no reservation using a probiotic if you have SIBO. Of course, use your own experience and some common sense. If you take a probiotic and you notice a negative reaction that lasts more than a few days, then a probiotic may not be a good fit for you.

The reason I say “more than a few days” is a little bit of turbulence for a few days as things are balancing out and your body is adjusting to a probiotic is not abnormal. So you don’t want to jump ship after a little bit of turbulence for a day. Give yourself three to five days. And if turbulence or any kind of negative symptom is still persisting after five days, up to a week, then that probiotic is likely not good for you. And try one of the other categories.

All right. This is Dr. Ruscio. And hopefully, this information helps you get healthy and get back to your life.

18 thoughts on “Can Probiotics Cause SIBO?”