Well here it is, the meat of the matter.  What causes thyroid problems?  There are several factors that can cause thyroid problems and they can occur in different areas of your body.  To simplify our discussing, I have broken these down for you with the following diagram. 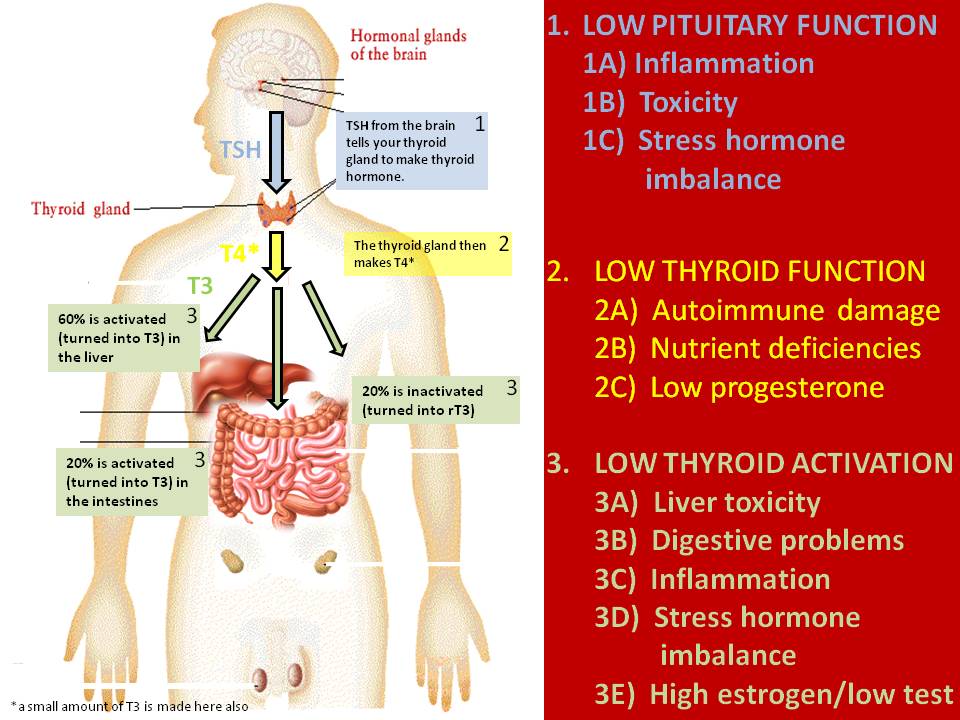 Low pituitary function can be caused by 1-7:

Low thyroid gland function (production of T4) is caused by1:

Low conversion of t4 to t3 (activation) caused by1:

Please note that autoimmune damage is both a type of a thyroid problem (from our last section) and a cause of thyroid problems itself.  If this does not make sense now it will shortly.  All of the causes listed here can cause either a ‘functional’ thyroid problem or an ‘autoimmune’ thyroid problem, and often times these causes can contribute to both at the same time.  We will detail this more in subsequent sections, and there will be an entire section dedicated to autoimmunity due to its importance and complexity.  For now let’s think of it this way, taking inflammation as an example.  Inflammation can cause a functional problem in some people or in other it could cause an autoimmune problem in others; it all depends on the person.  Here is an analogy.  Two people spend a day in the hot sun.  A fair skinned person may be well able to tolerate heat, but will develop bad sunburn.  A darker skinned person will not burn, but might get heat exhaustion if they can’t tolerate heat.  The sun, like inflammation, will affect people differently; it all depends on the person.  People with a family history of Hashimoto’s or other autoimmune disease will have a predilection to develop Hashimoto’s themselves if they are afflicted by one or more of the causes in our Cause of Hypothyroidism list.  People without a predilection towards Hashimoto’s thyroid autoimmunity may not develop this problem, but rather will develop a functional problem.

Lets look at 2 patients illustrating what this can look like. Sarah and April both come into the clinic presenting with the same ‘symptom’, hypothyroidism.  When we take the time to perform some detective work we see there are two very different causes at play for Sarah compared to April.

Sarah started having thyroid problems after her second pregnancy, her main complaint was fatigue.  As we will discuss in our autoimmune chapter, pregnancy is known to provoke thyroid autoimmunity.  When we tested Sarah we found she in fact had the autoimmune form of hypothyroid known as Hashimoto’s.  For Sarah, treatment focuses on balancing her immune systems to stop the Hashimoto’s autoimmune attack from damaging her thyroid gland; we treated Sarah with dietary change, antioxidant and vitamin therapy.  Unfortunately, prior to this Sarah was just put on medication and never educated about what she could do to prevent her condition from worsening.  During our work together Sarah was thrilled to see her antibodies levels were cut nearly in half in 6 months.  Sarah also witnessed her energy, which was not helped by the medication, slowly return to normal as her body became healthier.

April, on the other hand, reports her hypothyroid symptoms started about 5 years ago.  After taking April’s history she also mentions that her digestion has not been that good for about 5 years or so; gas, bloating and stomach burning.  Based on this history we decided to screen for a gut infection.  April had a bacterial infection in her stomach which was causing inflammation and a decrease conversion of T4 to T3.  April’s doctor said her thyroid was normal.  This was because he had only tested TSH and T4, so based on what he was seeing it was normal.  However, the fact she still had many hypothyroid symptoms should have prompted further investigation.  With our testing we clearly saw that T3 was off and the cause of this T3 imbalance was an infection in her intestines.  This infection was also causing her gastrointestinal symptoms.  Treatment in April’s case centers on removing the infection and repairing the gut, so that her body will start to convert T4 into T3 again.   April’s thyroid symptoms resolved over a number of months and as a side benefit her digestive problems went away too.  In both these cases the positive results were achievable because we were treating the thyroid condition at the cause

Hopefully this is all starting to come together, make sense and you are starting to see the big picture. The next several sections will discuss each cause in more detail.  More importantly I will share with you the medical references substantiating that these causes do in fact cause thyroid problems.  Then, we will discuss how you can treat these causes naturally.

7b. http://www.ncbi.nlm.nih.gov/pubmed/?term=1328349 Trusted SourcePubMedGo to source