From Guyton’s Textbook of Medical Physiology regarding hypothyroid patients, “The thyroid glands of most of these patients first have autoimmune “thyroiditis,” which means thyroid inflammation.  This causes progressive deterioration and finally fibrosis of the gland, with resultant diminished or absent secretion of thyroid hormone. 5”

“Hashimoto’s thyroiditis (HT) is a common disease, and is the most prevalent cause of hypothyroidism.” 6

Hashimoto’s is the most common cause of hypothyroidism in the US.  Hashimoto’s or Hashimoto’s disease is an autoimmune disease in which the body makes antibodies or immune cells that attack and damage the thyroid.  Why does this matter?  Well, if this process occurs long enough you can experience non-repairable damage to your thyroid gland and become hypothyroid.

It is estimated that there are a total of 88 autoimmune diseases.  Here are some other diseases where autoimmunity may be implicated

If autoimmune diseases were measured as one group, they would be tied with heart disease as the leading cause of disease in our country (more common than cancer). In cancer for example, we add up all cancer types to measure how many people have cancer. We add breast cancer, to ovarian cancer, to prostate cancer, etc.. to get our grand cancer total. Since we do not do this for autoimmune diseases the statistics may be misleading.

Here is a statement from the National Institutes of Health’s Autoimmune Diseases Coordinating Committee regarding autoimmune disease,

population – 14 to 22 million persons. To provide a context to evaluate the impact of autoimmune

affected approximately 22 million people in the United States in 1996. 16”

These estimates are considered to be conservative; meaning the actual percentage of people with autoimmune diseases is likely higher than this. These statistics are important because the most common cause of hypothyroidism is autoimmunity and because if you have one autoimmune disease you are at risk to develop another; so we want to have a sense for how common this stuff is.

At this point it should be clear that autoimmunity is not a good thing. One would think that if you have Hashimoto’s and are seeing an endocrinologist then you would have your bases cover. It is important to note this is not necessarily the case. Generally speaking the conventional healthcare system does not treat the autoimmune component of hashimoto’s. healthy_thyroid_tissueI’m not trying to step on the endocrinologist toes, but it’s important you know the truth. In the more conventional paradigm TSH and T4 are monitored and your dose of medication is adjusted over time as your thyroid is damaged by the autoimmune process and loses its ability to produce thyroid hormone. So over time you lose more and more healthy thyroid tissue and need medication adjustments as this plays out.

This diagram shows that as time passes, the amount of healthy thyroid gland tissue decreases and so does the output of thyroid hormone, T4. Please note TSH will correspondingly increase as your T4 decreases.

This is not speculation folks, we know as Hashimoto’s progresses your thyroid gland tissue can become damaged and replaced with scar tissue; we have ultrasound studies to prove it 17. Shortly we will discuss exciting research showing what causes autoimmunity and more importantly ways to stop the damage and even partially reverse it.

Before we discuss the causes and treatment of autoimmune thyroid aka Hashimoto’s, lets discus how we can identify if you have it. There are four lab markers that can be used to identify if thyroid autoimmunity is present.

The higher the level of antibodies, the worse the autoimmune damage likely is.  All my thyroid patients perform lab testing for thyroid antibodies.  We then track the levels over time.  TPO is the most commonly elevated 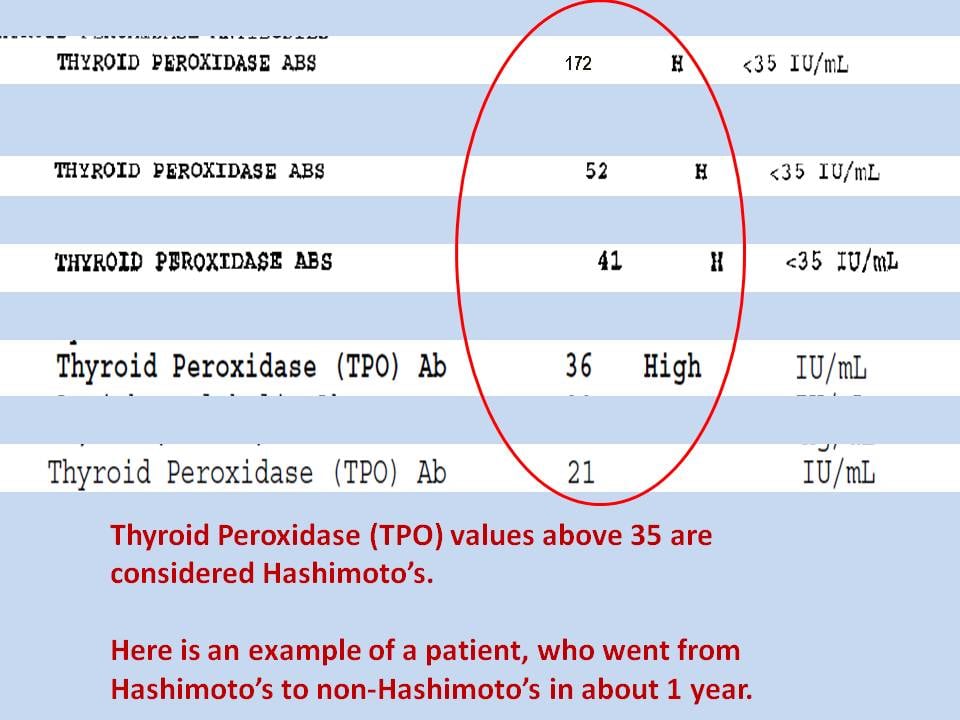 marked.  Here is the good news; it is absolutely possible to dampen the autoimmune process, normalize your lab values, stop the damage to your thyroid and save your thyroid.  It is possible to almost completely turn of the Hashimoto’s process.  Here is one patient’s TPO lab testing over one year.  As you can see she went from 172 to 21.  Normal is considered anything under 35.  So in 1 year we nearly turned off her Hashimoto’s.  To see more case studies you can visit www.DrRuscio.com.

Disclaimer; according to the FDA only a drug can treat a disease.  So we cannot say we are treating Hashimoto’s.  Many have said this is a derivative of the cozy relationship between the FDA and the pharmaceutical companies.  Unfortunately pharmaceutical companies have much political influence.  If this is new to you, entire books have been written on this topic.  Dr. Marcia Angell, former editor of the New England Journal of Medicine wrote a book entitled The Truth About Drug Companies, which is an eye opening account of pharma’s influence on medical practice in this country.  So while we are not ‘treating’ Hashimoto’s we are achieving some very impressive results with this condition.

Now hopefully you have a better understanding of autoimmunity and how it relates to your thyroid.  But what you can do?  Well strap on your science hat, grab an espresso, do a few pushups, get ramped up for the academics and join me in the next section, Causes & Treatments for Autoimmunity.