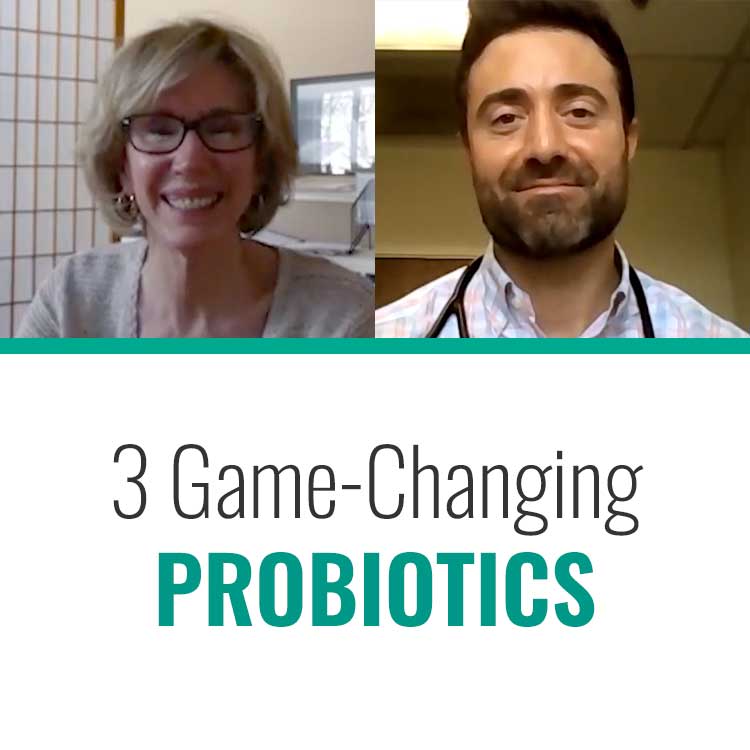 Often people try a few store-bought, random probiotics to help their gut, thinking they are all the same. Then they conclude that either they don’t work, or that they don’t tolerate them. Unfortunately, this can miss some of the most widely-studied effective classes of probiotics: a lactobacillus-bifidobacterium blend, S. boulardii, and soil-based probiotics. Phyllis, a patient, tried the random approach first and didn’t tolerate them. Then she tried the Healthy Gut, Healthy You probiotic protocol which brought in each of these three classes, one at a time. With this optimal group of three, she is seeing better digestion, including better bowel movements and more regularity. If you haven’t had success with probiotics, consider this protocol.

Dr. Michael Ruscio, DC: Hey everyone, this is Dr. Ruscio. Today I’m here with Phyllis, who’s had some nice results using the probiotic protocol that we discuss in Healthy Gut, Healthy You. She is seeing me as a patient of my clinical practice, but that was a pretty cathartic step for her that we just took. So I wanted to capture this moment.

One of the things I haven’t done is articulate how profoundly impactful the three-category probiotic protocol I outline in the book can be. So, Phyllis, can you get people up to speed on a little of your history and what you were doing prior, then we can talk about the effect of the probiotics?

Phyllis: Sure. So I’ve been having digestive issues for a little over three years now. I’ve tried a number of different things, have been on a paleo/low FODMAP diet for about two years, and had some success there. In the past, I’ve also tried random probiotics. And I seemed to have more of a negative reaction. So then I quit using them, figuring that it’s just not for my system.

Success With the Probiotic Protocol

This time around, I’ve been on this particular protocol, I think for about 6 weeks now. It has three different probiotics that Dr. Ruscio had me introduce in a very specific way. I was nervous about it, but willing to give it a try. My body handled those well, and I noticed a couple of things. One is just a general sense of having a calm gut, which feels good. Definitely, my energy baseline has increased. I’m having better bowel movements, some regularity, and it feels more like how I remember my body used to be. I wasn’t expecting such a positive reaction, because I’d done the other things. This was one of the more discernible differences in what I’d been doing. I’m very excited about it and I like the results. DrMR: Hey everyone. Just wanted to quickly tell you about a CBD that I’m experimenting with currently. And some people on our team have had really good results with, and who also helped make this podcast possible. Ned makes a hemp-derived CBD, and as you’ve probably heard, CBD can have a wide range of benefits for the gut, for anxiety, depression, other neurological conditions can be anti-inflammatory and provide the antioxidants.

I’ll include a few links to some of the interviews we’ve done in the past on cannabis [1,2], and we also have to be a little bit cautious. Most research has been done with full-spectrum cannabis, meaning THC also included, but the drawback to THC is it makes you high and so it’s hard to do stuff.

So I do think it’s worth a trial, and I’m having patients in the clinic start experimenting with CBD only to see if they can reap the same benefits many people are anecdotally reporting. Like Erin on our team who saw a massive reduction in her pre-menstrual cramps and Josh Trent‘s been on the podcast who remarked that NED CBD makes his gut feel happy.

We checked them out. They are a legit company, no isolates or synthetic ingredients. Lab-tested for pesticides, molds, and other contaminants. Non-GMO. And the base is MCT oil, and they are giving our audience 15 percent off plus free shipping when you go to helloned.com/ruscio. Use the code “RUSCIO”, at check out.

DrMR: I think it’s really worth underscoring that you did have some negative reactions to probiotics in the past. So we had you start on the three probiotics— the Lacto-Bifido blend,  S. boulardii, and the soil-based probiotic—one at a time, giving maybe five days for each. Again, this worked really well for you. And what I think thwarts some people are, as you hinted at, they’ve tried different probiotics before. But they’ve never really presented their gut with a well-rounded protocol that’s going to hit all three of the categories and give your gut that really diverse, healthy probiotic stimulus. It’s just such an important facet of gut health, probiotics.

It sounds so simple, “Just use these three probiotics.” Especially when someone says, “Oh, I’ve been to the health food store, I’ve tried this one, I’ve tried that one, I’ve tried the other one.” But again, there’s something about integrating the three categories. What we’ll see for most people is that they work together very well and you see a nice resolution of one’s symptoms.

However, for a small subset of people, they may say, “That one felt good, that one felt good, that one felt bad.” Because we’ve separated them out, we can now easily discern, “Okay that one didn’t feel good, I’ll leave that to the side and I’ll use these two.” Again, wanted to capture this, Phyllis, because you’ve been tinkering with your gut health for quite a while. And I think you were surprised, like, “Wow, just this simple probiotic protocol led to this fairly cathartic improvement.” For the people either reading the transcript of this or watching this, don’t discount how powerful a well-constructed, broad-spectrum probiotic protocol can be for your gut.

Phyllis: Absolutely. I’m glad to have shared my experience.

DrMR: Awesome. Any closing words you want to leave people with?

Phyllis: Mainly that if I’d been left to my own devices, these are not three I would have chosen. They’re totally outside my realm of knowledge. So for me, it’s just been wonderful to trust your recommendations, go forward, and then bam, they work. I’m happy.

DrMR: Thank you, Phyllis, for sharing your story. I really appreciate you being open to discuss this with us.

Phyllis: Okay, thanks. You have a good day.