Could your non-digestive symptoms be caused by an underlying gut infection? SIBO has become a popular topic of discussion over the past couple of years. We’re realizing that the majority of IBS cases have SIBO as the underlying cause. While we typically address the digestive symptoms of SIBO, there are also non-digestive issues, such as restless leg syndrome, pelvic pain syndrome, and rosacea that can be linked to SIBO.

If you need help with SIBO treatment, click here 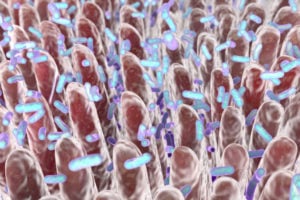 SIBO has become a popular topic of discussion over the past couple of years. We’re realizing that the majority of IBS cases have SIBO as the underlying cause. While we typically address the digestive symptoms of SIBO, there are also non-digestive issues that can be linked to SIBO. As with most chronic symptoms, there is often a gut component to a “non-gut” condition.

Syndromes that wouldn’t even seem to be tied to the gut have been linked to SIBO. These include restless leg syndrome and pelvic pain syndrome. Additionally, rosacea, a skin condition, has been linked to SIBO. It’s been found in many patients that once the SIBO is treated, these other conditions resolve.

This is promising news because anything that is labeled a syndrome usually means we don’t know the underlying cause. Now that studies are linking these syndromes to gut imbalances, namely SIBO, we’re able to treat these syndromes in some people.

All of the following diagnostic criteria must be met for RLS:

The frequency of symptoms varies considerably, and is defined as chronic-persistent or intermittent, as follows:

Chronic pelvic pain syndrome can happen in both women and men. In women, it’s often diagnosed as interstitial cystitis. In men, it’s displayed as chronic prostatitis.

Interstitial cystitis is a clinical syndrome characterized by daytime and nighttime urinary frequency, urgency, and pelvic pain. It has no clear etiology or pathophysiology, and diagnostic criteria for the syndrome remain undefined.

It is often described as an unpleasant sensation (pain, pressure, discomfort) perceived to be related to the urinary bladder, associated with lower urinary tract symptoms (urinary frequency or urgency) of more than six weeks duration, in the absence of infection or other identifiable causes.

Prostatitis is a condition that involves inflammation of the prostate and sometimes the area around it. Chronic prostatitis/chronic pelvic pain syndrome is the most common type of prostatitis.

The exact cause of this non-bacterial prostatitis condition is unknown. However, the disease could stem from persistent infection, inflammation, and/or pelvic muscle spasms.

Chronic prostatitis/chronic pelvic pain syndrome can be described as persistent relapsing pain or discomfort in any of the following areas:

Some of the functional symptoms include:

These are six types of rosacea based on symptoms. These include: flushing, vascular congestion (erythema or redness), increased vascularity, papulopustular skin lesions (pustules or enlargement of the oil glands), and thickening of the skin. Ocular rosacea includes damage to the meibomian glands with subsequent dry eyes, conjunctiva, and sclera inflammation with subsequent risk for corneal damage and loss of visual acuity.

Rosacea is generally considered an “idiopathic” disorder, meaning that the exact cause of the condition is unknown. Dermatology textbooks describe triggers for rosacea. These factors include dietary factors, exercise, and exposure to sun, heat, humidity, cold, wind, and medications.

Textbooks have not described the role of the gut, other than discussing the controversy of H. pylori infection of the stomach. New discoveries have been made linking disturbances in the balance of gut bacteria with rosacea, however research is slow in its pace.

One recent study evaluated the diagnosis of small intestinal bacterial overgrowth in the setting of rosacea. The researchers found that treating the group with SIBO with rifaximin showed a dramatic improvement in their rosacea. Just clearing up the SIBO led to 85% resolution of all rosacea findings in the patients.

Naltrexone is in a class of drug known as an opiate antagonists. Its normal use is in treating addiction to opiate drugs such as heroin or morphine. The dose used for this purpose is usually between 50 and 300mg daily.

Low-dose Naltrexone (LDN) has been used in the treatment of autoimmune diseases in the USA since 1985. It was found that using this drug in a very low dose increases endorphin levels. LDN causes the body to produce more endorphins. Dosing for LDN is generally 0.5-5mg.

Your doctor will usually start treatment at an ultra-low dose and increase this gradually over a period of weeks – until you are stable and side effect free.

The starting dose can vary from 0.5mg to 1.5mg – and is usually increased over 4 – 8 weeks to 4.5mg or higher. Some doctors increase this to twice daily for certain medical conditions.

For autoimmune diseases, patients typically start at 1mg and increase to 4.5mg daily over a period of 4 weeks.

LDN is an antagonist for the opiate/endorphin receptors:

LDN is one of the safest prescription drugs available. The main side effect is insomnia and vivid dreams, which is seen in 10-15% patients. Most endorphins are made around 2-4am, so it’s recommended to take LDN at night. But for those who experience insomnia, you can take it in the morning.

How long until you know LDN works for you?

You’ll need to be on LDN for about 2 months to know if it’s helping you. Gradually increase your dose over 2 weeks, starting with 1 mg working up to 5mg. The anti-inflammatory dose is 4.5 mg. Endorphins are shown to improve migrating motor complex, so LDN can be an effective prokinetic after SIBO is treated.

Other prokinetic pharmaceutical options include low dose erythromycin and Resalor (available in Canada). For those who tolerate probiotics, bifido species have also been shown to improve the migrating motor complex.

Do you need to take LDN forever?

For those with RLS, you will need to be on LDN long-term. IBD patients will remain on it long-term. LND is probably the safest pharmaceutical for IBD.

Probiotics can helpful for SIBO as second step as a healing role. First treat SIBO patients with antibiotic or herbal therapy. Then add probiotics for healing. For patients who have a negative breath test but have IBS symptoms, you may consider probiotic therapy.

For example, if someone tests negative for SIBO but has bloating, bifido infantis may be helpful as studies have shown this strain to reduce bloating. If someone is experiencing diarrhea, then S. Boulardii, Florastor, or VSL3 may be helpful probiotics.

When a patient doesn’t respond to SIBO treatment, then fungal overgrowth could be the issue. At that point, treating the fungal infection may be the next step.

If you want to learn more about syndromes related to SIBO and treatment with LDN, check out our podcast with Dr. Leonard Weinstock here.

If you need help with SIBO treatment, click here