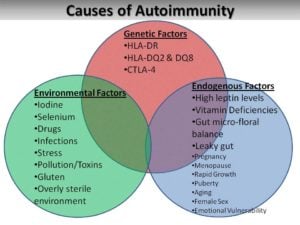 In this diagram (which I have adapted from the journal of Hormone Research in Pediatrics26 ) we see a summary of the factors that the medical literature has shown to be associated with autoimmunity.  It would be far too lengthily to discuss each one of these in detail, so I will cover the most influential factors associated with autoimmunity.  I will provide more detailed information in the chapter discussing autoimmunity as a whole and in other sections of the book.

The most important factors associated with autoimmunity and thyroid:

Iodine and thyroid health is now becoming a controversial issue.  It appears that ingestion or supplementation with high levels of iodine may provoke autoimmunity in some 18-19 while it may also be helpful for others.  To make a simple generalization, for most people iodine therapy is one of the last things that should be done.  This is because using iodine can provoke autoimmunity. This especially true if you have a predisposition to autoimmunity, have high levels of inflammation and have high levels of certain toxins.  Selenium is not controversial and we know it can do a number of good things like 20:

Several different bacteria and viruses have been associated with autoimmunity.  Some of the most well studied are:

This has caused researchers to identify these as one of the contributors to developing autoimmunity 21-28.  In fact, some studies have even shown as infection activity increases, so does the severity of the autoimmune process.   Additionally some studies have shown that after treating an infection antibody levels/thyroid damage decrease.

Another study was conduction in Italy that illustrated how powerful treatment of infections can be in halting the autoimmune process.  10 patients who had Hashimoto’s and also had an H. Pylori infection were selected. 5 underwent treatment and 5 did not.  Here is a breakdown of the findings (please note adequate data was only available for 3 patients from each group). 21c

Essentially what you are seeing here is the patients who were treated for the H. Pylori bacterial infection experienced a significant drop in their antibody levels, while those who did not undergo treatment did not.

Some researchers are theorizing the reason why Epstein Barr virus might cause autoimmunity is essentially because the virus actually gets inside the thyroid gland thus stimulating your immune cells to attack the gland and cause autoimmunity 21b.

The two aforementioned bacteria happen to live in the digestive tract, which brings us to the next important item, digestive or gut health.  Some research is now suggesting that loss of proper intestinal function (also known as leaky gut or increased intestinal permeability) may be the most important factor in allowing the development of autoimmunity 29.

The logical question would then be, “what causes a leaky gut?”  The two top contributors to leaky gut are infections and food allergies.  I believe that digestive health is likely the most important factor for one’s overall health; this has been reinforced in my life personally, with my patients and by research.  We will spend quite a bit of time discussing gut health in this book.  Since we already covered infections, let’s move on to the other cause of leaky gut, food allergies.

Have you ever stopped to wonder why so many people with hypothyroid also have digestive problems?  One reason is because when you have Hashimoto’s you have an increased chance of having a gluten allergy and vice versa 29b.  Gluten is likely the most common food allergies and food intolerances.  Gluten allergy/intolerance is one of the most overlooked aspects in medicine.  For some reason food doesn’t seem to be that big of a deal compared to fancy MRI machines and shiny medical devices.  But make no mistake, this is a big one.

Again much more on this to come, for now here is the bottom line; those who are allergic to gluten, and eat it, make their autoimmune conditions worse.  Studies have documented that coming off gluten decrease the severity of the autoimmune process, improves hypothyroidism, allows patients to decrease their thyroid medication dose, and in plain speak just helps you feel a whole lot better. 30, 31

We know from observational studies that the incidence of certain autoimmune disease becomes more common as exposure to sunlight decreases.  This has naturally led to the hypothesis that lower levels of vitamin D may be associated with autoimmunity.  As we have studied this further we have seen a number of studies show that vitamin D deficiency is associated with autoimmunity and with Hashimoto’s specifically 32,33.  There have also been a number of studies that have shown vitamin D therapy is a successful treatment for autoimmune conditions 34, 35.  While the number of studies looking directly at vitamin D therapy’s effect on Hashimoto’s are sparse, it is certainly safe to say optimizing vitamin D levels should only benefit someone with Hashimoto’s.

Several toxins are known to have a deleterious effect on your thyroid.  Many toxins may not cause autoimmunity per se, but can act to disrupt how much thyroid hormone your thyroid gland can make thus making you hypothyroid.  Some studies, however, have shown mercury can provoke autoimmunity.  In a study published in the journal of Neuroendocrinology Letters, patients who were allergic to mercury and underwent removal of their mercury fillings experienced a decrease in their Hashimoto’s antibodies 36.

You or someone you know has probably said, “I never felt the same after I had my child.”  This is because some women will develop Hashimoto’s or other autoimmunity after a pregnancy.  This is also known as post-partum autoimmune thyroiditis (after pregnancy autoimmune induced thyroid inflammation).  This may happen for two different reasons.  Firstly, it may be subsequent to the immune system modulation during gestation.   During gestation your immune system shifts to protect from making antibodies to the fetus.  This change may tip the fine balance needed to maintain a healthy immune system and cause you to fall into autoimmunity.  The second factor may be the depletion of certain autoimmune protecting nutrients like selenium and omega 3 fatty acids.  The good news is that women can take selenium during gestation to manage their Hashimoto’s with no negative effect to the child.  One study looked at a group of women who developed thyroid disease during pregnancy.  One group was given selenium and the other group was not.  The women who were given selenium had a 28% chance of developing thyroid disease after their pregnancy whereas in the women who had no selenium it jumped to 48% 37.

Before we leave the topic of autoimmunity and Hashimoto’s I would like to make two more important notes.

According to the National Institutes of Health’s Autoimmune Diseases Coordinating Committee,

“In autoimmune diseases, biologic onset precedes the development of clinical symptoms, often by months or years. 38”

Other researchers have also commented,

“Molecules called predictive autoantibodies appear in the blood years before people show symptoms of various disorders. Tests that detected these molecules could warn of the need to take preventive action. 39”

This means that your antibodies will become elevated before you have symptoms, and we can infer that by the time you have symptoms autoimmune damage has been going on for some time.  My most frustrating clinical experience is exemplified by Jan.  Jan comes in feeling pretty good, but as part of our standard screening, we find an autoimmune disease.  I explain to Jan the findings.  At first Jan is very concerned, but glad we found it before it caused her not to feel well.  Then I explain we need to change her diet, address her gut health, investigate and clear any infections, replete any nutrient deficiencies, etc…  Jan starts out all in, but then after a month, her motivation tanks and she replies, “well I have done some of this stuff, but I don’t feel much different.”  Jan then decides all is well and goes out into the world deciding she does not want to be bothered with ‘fixing’ things right now.  My heart sinks because I know what will happen.  In six months, or a year or two years Jan will be back.  Her remarks will be something like this, “I don’t know what happened but all of the sudden I am tired all the time, I am having a hard time sleeping at night, I am starting to be depressed and my digestion is really bothering me.  I went to my GP and he gave me an antidepressant. He also referred me to a GI doctor who said everything is fine.  I feel like I am falling apart.  What should I do?”

It is sad to say that most people have to get sick before they are willing to make some changes.  I am hoping this book will help save some people from having to go down this road.  In case you did not connect the dot here, ‘what happened’ to Jan was, while she was off living her life her autoimmune condition was slowly causing damage to her organs.  At first, this did not affect organ function, but over time, well, it did.  So now we do the same stuff we would have done a year or so ago but have a larger mess to clean up, and maybe even some unrepairable damage.

I hope after reading this chapter you feel empowered and that you realize you do not have to settle for reporting to your doctor’s office, being given a pill and then just watching from the sidelines.  I hope you feel empowered to take an active role in your health, determine what is causing your hypothyroidism and take steps to address it at the cause.