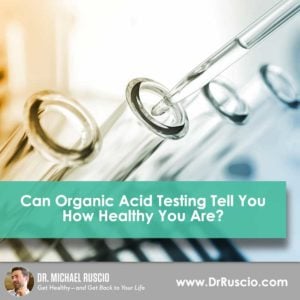 In this week’s podcast, I spoke with Dr. Jeff Moss about how organic acid testing can be used to diagnose and treat chronic conditions. I’ve been wary of organic acid testing, because many use it with a narrow focus, which can lead to unnecessary treatments or even worsening of a condition.

However, Dr. Moss addressed my concerns and we talked about how he uses this testing as a comprehensive glimpse at a person’s health. When used in this manner, organic acid testing can be used to successfully diagnose and treat chronic conditions like gut dysbiosis.

Can Organic Acid Testing Tell Me How Healthy You Are?

Organic acid testing is very popular in many functional medicine circles because it’s thought to provide a snapshot of a patient’s overall health.

Personally, I have reservations regarding deficiency testing such as organic acid testing because I believe the “snapshot” it provides is often incomplete and even misleading.

Just because a marker on a test is high or low doesn’t necessarily mean that marker is clinically meaningful and relevant, or that treating a particular marker will result in a positive therapeutic outcome.

In other words, just because you’re deficient in vitamin D, for example, doesn’t mean taking vitamin D supplements will solve the underlying problem. In fact, I’ve seen first-hand patients with vitamin D deficiency not respond to supplementation because of a possible underlying infection.

Instead, I’ve found more success in identifying disruptions in normal body function and correcting those mechanisms over applying a Band-Aid to a marker in a test.

However, I recently spoke with Dr. Jeff Moss on my podcast about organic acid testing and he had some very interesting points. When organic acid testing is used as a comprehensive look at the whole body and individual markers are not singled out, it can be an effective tool in identifying chronic conditions, including gut dysbiosis.

I was happy to hear that this form of testing can be used in a manner I find most successful – as a method to look for imbalances to determine system dysfunction.

Organic acids are metabolites (typically from amino acids) which can be tested for in the urine. For a long time, organic acid testing was primarily performed on newborn babies to determine if they were relatively healthy and free of any life threatening metabolic disorders before leaving the hospital.

Eventually, doctors began to wonder if similar testing could be used to identify other chronic illnesses and even less severe disorders, such as gut dysbiosis.

Commonly, these organic acid tests were being used to find micronutrient deficiencies. After completing these deficiency tests, it seemed the obvious next step was to supplement the appropriate deficiencies.

Like in my example above, if you were deficient in vitamin D, wouldn’t it make sense to give you vitamin D supplements? Dr. Moss found this wasn’t the case.

Surprisingly, a simple supplementation regimen wasn’t enough. Keep in mind, people who are undergoing organic acid testing are usually pretty sick and they have already undergone a series of other tests. For the most part, supplementation did not cause any dramatic life improvements.

Additionally, the follow up organic acid tests showed little improvement even after changes in micronutrients and lifestyle were made. The testing reflected patient reports, which made Dr. Moss wonder what was going on.

This is good news! In my experience, testing that looks at “big picture health” is always better.

When organic acid testing doesn’t change after dietary recommendations are implemented, it tells us there is something else impacting an individual’s health beyond what they are eating (i.e., micronutrients). These impacts could be environmental inputs, toxins, and emotional stressors.

The important thing to remember about organic acid testing is it gives you a comparative analysis. You cannot single out different markers and claim that one elevated metabolite indicates a definitive diagnosis.

My issue with organic acid testing was that it appeared to me most physicians were looking at the results and doing just that – singling out individual markers to make broad conclusions. When you look at individual indicators in a lab test without considering the systems they are part of – you can completely miss the mark.

Those with chronic conditions didn’t get sick overnight. Therefore, it’s important to consider the different stressors which may have allowed harmful bacteria to leave their dormant state and gain a greater presence in the gut.

The solution isn’t always killing the bad guys, sometimes it’s returning the gut to a healthy state to keep the bad guys in check.

This is why I warn against grabbing for the strongest treatment against any marker indicating gut dysbiosis. It’s usually not necessary to blast the gut with the strongest antimicrobials.

Organic acid testing seems to be an excellent weapon to add to the arsenal, but only in the hands of a skilled operator. If you are having organic acid testing done, I urge you to do so with a doctor who will view the results in a manner that includes whole body systems and doesn’t treat individual markers.

Share this with a friend or family member who’s struggled with a chronic condition. Organic acid testing could be a good route for them to explore.