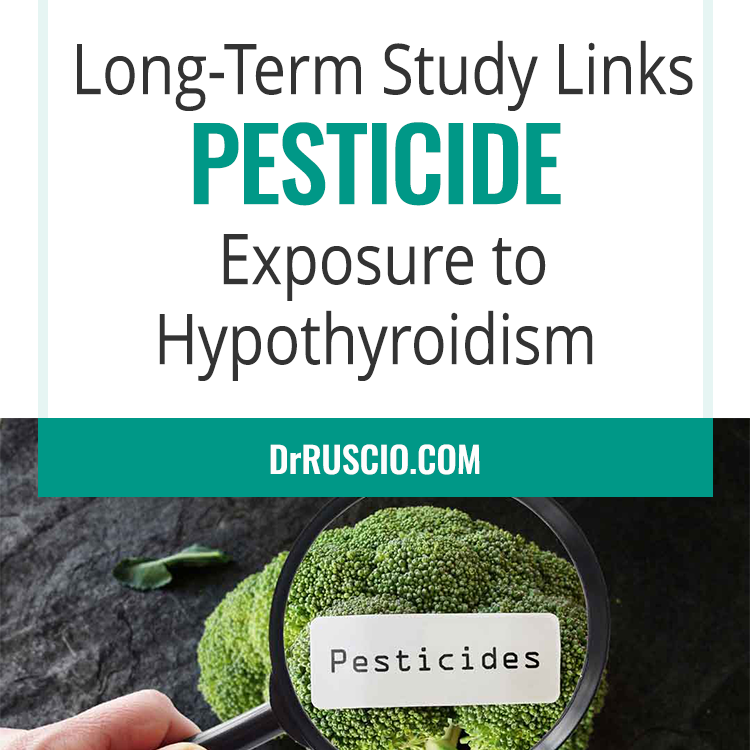 Eating organic may reduce your risk.

A large, 20-year study of farmers shows associations between exposure to certain pesticides and herbicides and an increased risk of hypothyroidism. Many of these chemicals are still in use. Note that the study measured occupational use, or very high exposure. Another study which measured pesticide levels in the blood—after participants ate organic versus conventional food—showed higher levels of pesticides in the blood of those who ate conventional food. Eating organic food whenever possible may help to moderate risk to your thyroid from pesticides and herbicides.

Dr. Michael Ruscio, DC: Hi, everyone. This is Dr. Ruscio. Let’s discuss the association between pesticide exposure and hypothyroidism. Just as a brief bit of background, there is some suggestion that exposure to pesticides and herbicides may interrupt and interfere with thyroid function through a variety of mechanisms.

Study: Pesticide Use and Incident Hypothyroidism in Pesticide Applicators in the Agricultural Health Study.

Important: This study involves people who have a high level of exposure to pesticides (male and female farmers)

Pesticides could alter thyroid function by several mechanisms including …

What you can do?

Oftentimes the degree of influence is important—meaning that, yes, there may be some mechanism of thyroid function that could be influenced by an herbicide or a pesticide—but we also have to show that that has an appreciable influence in someone’s system and that we’re not getting overly wrapped up in a very small perturbation of a mechanism that doesn’t result in any meaningful type of impact.

Pesticide Use Correlated with Increased Hypothyroidism

However, this is one case (even with that in consideration) where we do appear to have evidence showing that pesticide exposure has been correlated with significant disruption of thyroid function. I’ll put the abstract up here on the screen: “Pesticide Use and Incident Hypothyroidism in Pesticide Applicators in the Agricultural Health Study.”

So an important point here to lead with is, this is not looking at people who ate non-organic food and therefore were exposed to the pesticides and herbicides that are higher in non-organic than they are in organic food. These are people who actually work in agriculture, mainly farmers who are applying the pesticides. This is showing association with hypothyroidism in a population of people who have a high level of exposure. So it’s important to keep that in mind, and I’ll wrap that into our conclusion here in a moment.

This study revealed that pesticides are associated with an increased risk of hypothyroidism in male and female farmers. Many of these pesticides are still being used in agriculture today. Click To Tweet

But let’s look at the specifics of the study. The study “evaluated associations between use of specific pesticides and incident hypothyroidism in private pesticide applicators in the Agricultural Health Study (AHS) [or a group]… The AHS is a prospective [meaning, going forward in time] cohort [meaning, group] study of licensed pesticide applicators (mainly farmers) and their spouses from North Carolina and Iowa.” They followed 35,150 male and female applicators over 20 years.

It was found that every use—meaning ever using or applying—of eight insecticides and three herbicides, including glyphosate, was associated with increased risk of hypothyroidism. So that’s a key finding. Continuing: “These findings are generally consistent with prior analyses of the prevalence of hypothyroidism [in this cohort],” and also a very important point here, “many of these pesticides are still being used in [current] agriculture.”

They further draw attention to the fact that pesticides could alter thyroid function by several mechanisms, including interference with thyroid hormone synthesis or creation, transportation, and metabolism, via direct immunomodulation or development of autoimmunity. But they also insert the caveat that there are limited data illustrating these mechanistic pathways. Again, in recap, we see fairly compelling evidence that in agricultural workers who have high levels of exposure to herbicides and insecticides, there is an increased prevalence of hypothyroidism.

So what can you do? You can eat organic whenever possible. And there are data. We reviewed a study four to five years ago, I believe published in the Journal of Pediatrics, showing measurable differences in pesticide levels in the blood of people who ate organic versus non-organic. Those eating non-organic or conventional food had measurably higher levels of certain pesticides in their blood. So there is certainly something here, even for those who are not working as farmers, per se.

But also, don’t worry—and this is more my opinion, but I think this is a reasonable opinion to reach—if you miss some meals (meaning if some meals are non-organic). Don’t let that lead you to be fearful or worried that you’re going to be having this influx of pesticides in your system that are going to greatly increase your risk. In my opinion, this is very likely dose-dependent, meaning the longer and the more frequently you’ve been eating non-organic, the higher your risk, and the more you’ve been eating organic, the lower your risk.

These are not absolutes, meaning that someone who’s been eating non-organic for 15 years has a much different risk than someone who has been eating organic for 15 years and occasionally has a non-organic meal. Again, that’s my opinion, but I think that’s a pretty reasonable read of the data, so as to prevent you from going to an overzealous position on organic versus conventional food. Hi, everyone. Let’s talk about probiotics, which helped to make this podcast possible. Functional Medicine Formulations contains a line of probiotics that I personally developed, and I’m super excited to be able to offer you the same probiotics that I’ve been using in the clinic for years and are a byproduct of an extensive review of the literature plus my own clinical experience.

In this line, you will find my favorite three probiotics in all three of the main categories that work synergistically to help you fight dysbiosis, like SIBO, candida yeast, and H. pylori, help to eradicate parasites, help to reduce leaky gut and repair the gut barrier, and can improve gas, bloating, diarrhoea, constipation, and may even improve mood, skin, sleep, and thyroid function because of the far-reaching impact of the gut. You can learn more about these at drruscio.com/probiotics.

Again, there are some compelling data here, showing that—at least in agricultural workers—there is an increased risk of hypothyroidism due to pesticide exposure. This ostensibly applies to those who are eating non-conventional food, although I don’t know that that’s been borne out by the literature yet. I think it’s safe to conclude that a good health practice would be to opt for organic whenever possible, but also not be dogmatic about it and be okay with occasional non-organic meals, because it can be very difficult to only eat organic 100% of the time.

So one piece of the thyroid picture is food quality. There certainly seems to be at least an inference we can draw here, suggesting that normal people (who are not farmers) should be opting for organic food whenever possible. This is Dr. Ruscio, and I hope this information helps you get healthy and get back to your life. Thanks.