Start With Your Gut

How You Can Get Healthier Faster by Taking This One Step 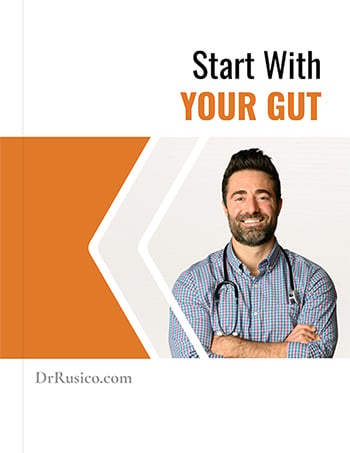 I learned the importance of gut health firsthand, in a very eye opening and humbling experience that occurred in my twenties. My whole life I had been a pretty happy and high energy guy, but then suddenly everything started to change. I didn’t know it at the time, but the series of events that followed would change my entire life.

At first I noticed I just felt kind of tired. You know, the kind of day you have every once a while where you feel like you are dragging? But, I was feeling like this every day; needing two to three naps a day, having a hard time thinking, and just wanting to put my head down and rest. Come to think of it, I was feeling cold too, and I was suddenly needing to wear more clothes than everyone around me. Maybe it was because I felt like my hair was starting to thin out also?

These symptoms certainly were not fun, but I figured it was just because I had a lot on my plate or maybe because I was ‘getting a little older.’ I didn’t like the way I felt, but I guessed I could live with it. I mean, what else could I do? I was already eating well and exercising.

Then things started to get worse, and I soon learned how maddening insomnia can be.

I would wake up at two in the morning and I would not be able to go back to sleep. I was tired during the day but for some cruel reason I was wide awake lying in bed at night. I was also craving sugar. So sometimes I would get in my car and drive to the store at 3am to buy a candy bar. When morning finally came, I was of course tired and had no problem sleeping when I needed to be awake. And, for the first time in my life, I knew what it felt like to be depressed as occasional bouts of depression set in.

I was starting to realize that this wasn’t normal and that something had to be wrong.

I thought to myself, ‘Well I guess I will go see a doctor, this is what doctors are for, right?’

So I did. I went and saw three doctors: a family doctor, an internist, and an endocrinologist. I was relieved to be taking action and I knew a doctor would find something, tell me how to fix it, and then I could get on with my life. Good news and bad news was to follow.

I then decided it was time to take matters into my own hands. I was a pre-med student, was working as a personal trainer, and also studying holistic nutrition. It’s because of this training that I already had myself on a healthy diet and exercise program, but obviously I needed to take things to the next level. I started reading and studying everything I could on my symptoms, which now included fatigue, depression, insomnia, feeling cold, thinning hair, and cravings.

I eventually concluded that I had hypothyroid and adrenal fatigue. This fit all my symptoms! This had to be the cause I was looking for! I started on a number of different supplements that supported the adrenals and thyroid, and I started to feel better. I felt maybe 30% better, but this only lasted for a few weeks and then I slowly returned to normal. I was crushed. I was also a bit irritated because I spent a few hundred dollars on all these supplements.

As if things weren’t bad enough already, then another symptom appeared that might have been the worst of all: brain fog. I experienced episodes where I felt like I was drunk: it was hard for me to speak clearly, I couldn’t remember things, I felt uncoordinated and just like my head was in a fog. This would happen after I ate, but the food I ate didn’t matter; it was completely random. I tried keeping a food journal, but nothing ever added up.

I continued on with researching and trying to solve my problems. Next I thought, “Maybe this was all because of low testosterone?” So I went on a testosterone-boosting protocol, which provided about a 30% improvement that was again short-lived. OK, more reading and internet research…. Perhaps it was mercury toxicity? Maybe this is why I also have brain fog? I was able to get a urine test and it showed high levels of mercury and lead. ‘Yes! Finally, a test found something, this has got to be it,’ I thought! I started on a metal detox program, and… felt no different. Even as my levels of metals improved according to the testing, my symptoms did not change. I then finally tried food allergy testing. This test showed a whole bunch of foods I was apparently allergic to. So I avoided these and felt like I was eating a diet of 4 foods total. Even after all of this excruciating dietary effort, I did not get better.

At this point I was starting to feel crazy, clearly something was not right, but nothing had worked! Even treating test results hadn’t helped. Luckily, I had a weekend workshop for my holistic nutrition training and heard about a doctor who practiced functional medicine, which was apparently the type of doctor everyone in this community went to. I got some more information on this doctor and it seemed like he did exactly what I needed, but he didn’t take insurance and I was a student. At that point in time I had to save up to afford a haircut, never mind pay $300 for an initial exam visit. But, what did I have to lose? At this point I was desperate, I would have done anything.

After seeing this doctor, he told me he was suspicious that I had an infection in my intestines. I remember thinking ‘Are you kidding me? I don’t have diarrhea or other digestive symptoms. Fix my insomnia, depression, and brain fog please!’ However, it turned out this doctor was right. I had an infection in my intestines and this one thing was the underlying cause of all my problems. As I treated this infection, I experienced slow and steady improvements of all my symptoms that lasted. Over the course of a few months I gradually returned to normal. What a relief!

I was so moved by my experience I decided to follow in this doctor’s footsteps and went into functional medicine and took a special interest in digestive health. For the past several years I have been able to help sick and suffering people determine the cause of their illness and then recover and vastly improve their health. It has truly been an honor and privilege to do this work. However, I have also become increasingly concerned for those who were like me, sick and trying to recover their health.

With the boom of available information on the internet, people seem to be getting more and more confused about what to do. There is so much information and are so many options and opinions that someone could flounder with their own self-diagnosing and treatment, the way I was, for 30 years and still not have done it all. What makes matters even worse is this sea of information is further polluted by marketing jargon, which is made to look like science in attempts to sell you a healthcare product. As someone who actually performs and publishes clinical research, I’ve found this appalling. Maybe worst of all is that healthcare is sometimes looked at as more of a business than it is a healing profession, and there are clearly those who are taking advantage of the fact that sick patients are willing to spend lots of money in order to feel better. All of this has created the perfect storm, where healthcare has become confusing, way too elaborate, and very expensive.